Officials in the Health Department claimed that MC officials miss the challan activity. 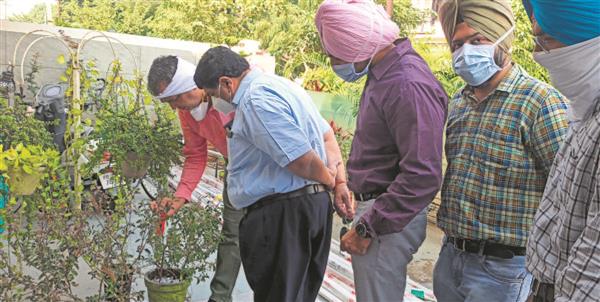 Despite a rapid increase in the number of dengue cases, the number of challans issued by the Municipal Corporation and councils has been low in Patiala district. The matter was discussed at a district-level meeting organised by the ADC (General) today.

Officials said the departments had been directed to step up efforts against the menace.

The Health Department, Patiala, had checked for dengue larvae at 5.15 lakh spots, including residential and commercial places. Of these, larvae were identified and destroyed at over 2,903 places, said Civil Surgeon Harish Malhotra.

In today’s meeting, the departments were directed to step up efforts in the regard.

SDM Charanjit Singh said his office was also writing to various BDPOs of the Rural Development and Panchayat Department. He said: “We are directing them to step up efforts towards the same and carry out fogging and other necessary drives in villages as well. The DC will hold a review meeting with department heads after 10 days.”

Sources said officials of the MC had not been joining the Health Department officials for larvae checking. MC Commissioner Poonamdeep Kaur said the MC was executing its role of fogging and larvicide spraying.

“The work of issuing challans falls under the ambit of the Health Department. We make a roaster of areas to be covered for fogging everyday. Though the checking is on, it is affected by Covid-19,” she said.