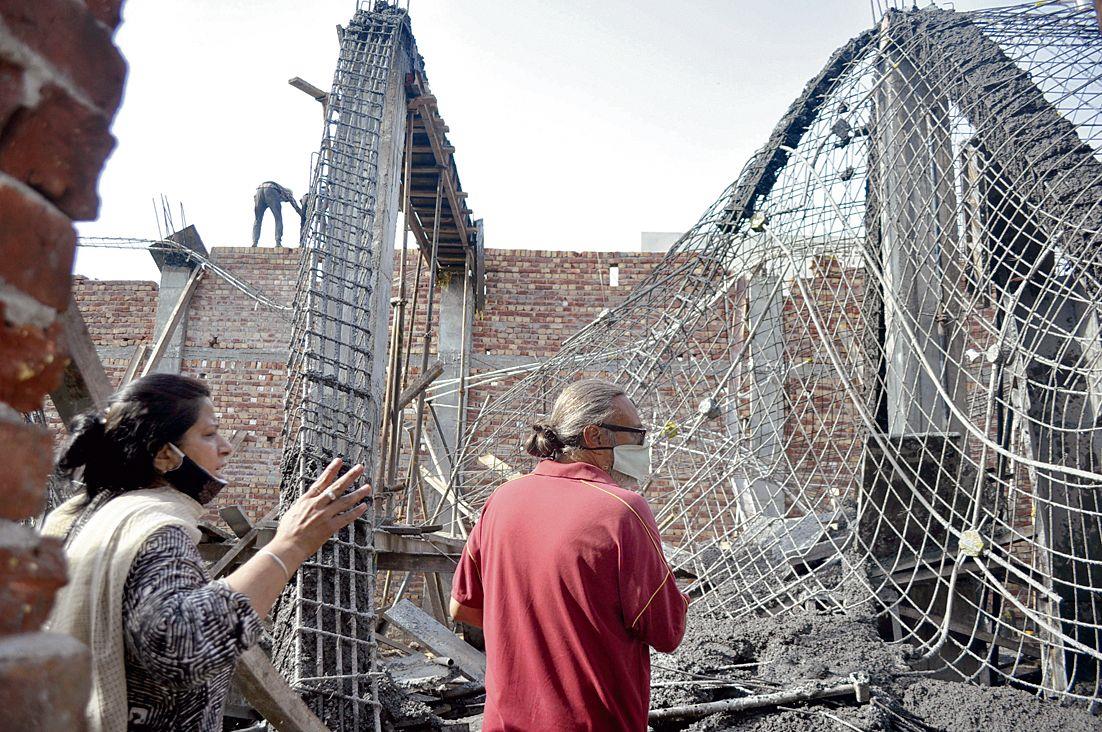 The debris of the under-construction building that collapsed near sabzi mandi at Sanauri Adda in Patiala. Tribune photo: Rajesh Sachar

Six labourers were injured when they got buried under debris after an under-construction building adjacent to the new sabzi mandi at Sanauri Adda collapsed today afternoon. Those buried were pulled out around two hours after the incident and rushed to the Government Rajindra Hospital.

Onlookers said construction of the building in an area over 500 square yards had been going on for the past few days. The first floor of the building was being constructed when it collapsed, they added. Labourers started the work of laying the reinforced cement concrete (RCC) roof today at 11 am, said Parminder Singh, who was working on an adjacent site.

While owners and contractors were not available for their comments, Municipal Corporation (MC) officials said the building construction work was being carried out illegally.

Interestingly, the site was adjacent to a nullah, which was covered by the MC recently. Earlier this month, an illegally constructed roof adjacent to another nullah collapsed leaving many domestic animals injured.

“Junior officials do not report illegal construction. Those involved are not taken to task. Minor action after issuance of a notice is taken only after an uproar,” they added.

Amarinder Singh Bazaz, former Mayor said, “Illegal construction is on the rise in the city. Hundreds of buildings have been constructed illegally. It is happening with the connivance of MC officials.”

Meanwhile, officials of the MC building branch, including ATPs and STP were not available for comment despite repeated attempts to contact them.

When contacted, Municipal Commissioner Poonamdeep Kaur said, “We have issued orders for demolition of the under-construction building. Before this, owners were issued multiple notices. The building along with shops adjacent to it will be razed in two to three days.”

Kundan Gogia of the Aam Aadmi Party (AAP), who reached the site, demanded, “A police case should be registered against owner of the under construction building.”

Inspector Inderpal Singh, SHO, Patiala Kotwali, said, “Police officials have gone to hospital to record statement of the injured. A case will be registered thereafter.”