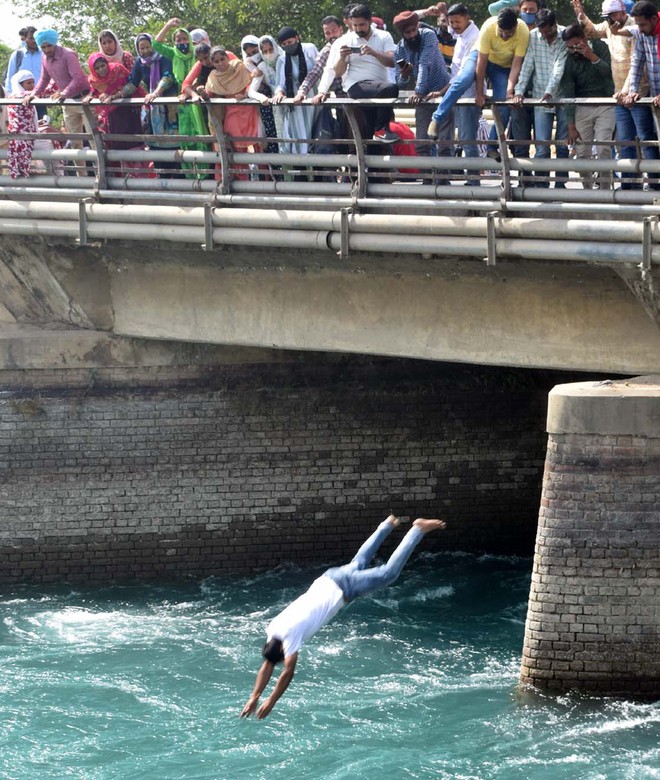 A protester jumps into the Bhakra canal in Patiala on Sunday. Photo: Rajesh Sachar

Demanding jobs, two unemployed ETT pass teachers jumped into the Bhakra canal near the Passiana police station this afternoon. They were, however, rescued by divers soon after.

The teachers were staging a sit-in on the Bathinda-Chandigarh highway when the incident occurred.

Youth Forced to take such steps

The youth have been forced to take such steps because they see a dark future ahead. Instead of addressing their concerns, the government is thrashing them.

The ETT and TET pass teachers said the government should immediately advertise 10,000 fresh posts for their cadre and bar BEd graduates from applying for the posts.

Sandeep Sama, union leader, said: “We have been protesting for months in Patiala and Sangrur, but the government had not paid heed to our demands. Qualified youths of Punjab are jumping into canals for jobs, while the Chief Minister is bragging about giving jobs to youngsters.”

The teachers lifted their protest in the evening after an assurance in writing of a meeting with Education Minister Vijay Inder Singla, Education Secretary Krishan Kumar and Secretary to Chief Minister MP Singh.

Earlier, the police cane-charged BEd and TET unemployed teachers who, in a separate protest under the banner of the Sanjha Berozegar Morcha, tried to march towards the Chief Minister’s residence.

During the face-off between the police and teachers, several protesters were detained.

Some protesters also suffered injuries in the clash, it was learnt.

DSP Yogesh Sharma said: “Our men also suffered injuries in the clash. We will file an FIR under relevant sections. The detained protesters were released after a meeting was fixed between them and the Patiala MP.”

The AAP condemned the cane-charge by the police, calling it reprehensible. AAP Barnala MLA and Youth Wing president Gurmeet Singh Meet Hayer said CM Capt Amarinder Singh, who had made tall promises to the youth before the elections, was now raining batons on them for demanding their rights.