NGT order continues to be flouted in Bahadurgarh : The Tribune India

NGT order continues to be flouted in Bahadurgarh 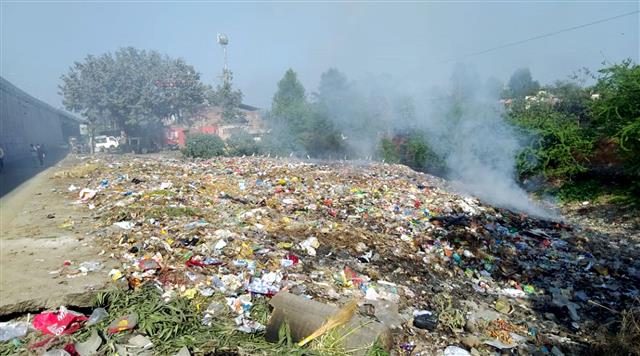 Garbage on fire at a dump in Bahadurgarh. photo: Rajesh Sachar

Paying no heed to directives of the National Green Tribunal over implementation of the solid waste management rules and the Model District Environment Plan, Bahadurgarh continues to witness disposal of garbage waste in the open. The site where the garbage is dumped and set on fire is at a distance of less than 100 metre from the Bahadurgarh police post, and outside a sports stadium on the Patiala-Rajpura road.

The NGT’s monitoring committee has held a number of meetings for implementation of the waste management rules with officials of the district administration. A meeting of the committee, led by its chairman and former Punjab and Haryana High Court Judge Justice Jasbir Singh, was held on February 24 to decide and fix responsibility on the persons and departments responsible for implementation of the solid waste management rules-2016.

Contrary to the waste management rules, garbage from the marketplace is dumped on shamlat land which comes under the administrative control of village panchayat run under the Rural Development Department.

Residents said, “The dump is on the village shamlat land. It is a major inconvenience for residents and youngsters living in the area. No one pays heed despite the fact that it is nearby a police chowki, a dispensary and a religious place.” They said waste from various shops in the vicinity was dumped in the open.

DDPO Patiala Roop Singh said, “I have directed the BDPO to provide me details of the dumping activity and jurisdiction of the land.”

DC Sandeep Hans said I would look into the matter and get it corrected.