No fresh registration for frontline workers 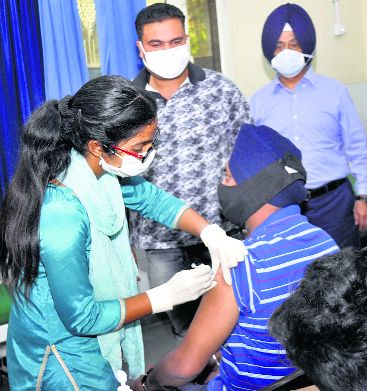 A health worker administers the Covid-19 vaccine to a man in Patiala on Sunday. Rajesh Sachar

In the wake of poor response from frontline workers, the Health Department has decided not to extend the fresh registration to the members of the group for the Covid-19 vaccination.

The vaccination of healthcare workers started on January 16. The drive was extend several times for optimal coverage but could not yield the desired results as a significant number of frontline workers were reluctant in getting the vaccine shots.

Sources though claimed that there was an unusual increase in the new registrations, which prompted the Health Department to stop fresh registrations for frontline workers with an immediate effect.

The sources informed that many ineligible beneficiaries were being registered for immunisation in the garb of healthcare workers.

As per the Health Department, 19,340 healthcare workers were supposed to receive the Covid jab, but only 9,587 of them received the shots.

Similarly, of 20,772 non-medical frontline workers, only12,552 received the Covid vaccination.

Patiala Civil Surgeon Dr Satinder Singh said they had motivated the healthcare workers for the Covid vaccination, but could not vaccinate all of them.

Following the response and rising Covid cases, the Health Department, along with the district administration here, has ramped up the immunisation drive by increasing the vaccination centres and staff.

Until now, 38,082 senior citizens have received their first dose of the vaccine in Patiala. Following the response, the Health Department has ramped up the immunisation drive in the district.