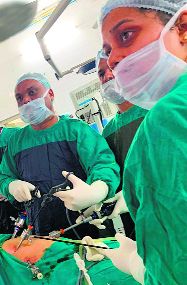 A laparoscopic surgery being performed at Rajindra Hospital in Patiala. File photo

Leading from the front, Dr Ashwani Kumar, head of the Department of General Surgery, performed the first laparoscopic surgery at the emergency operation theatre today.

“Earlier, only open surgeries were done in the emergency. Now, we are aiming to deal with emergencies in a minimally invasive way,” said Dr Kumar.

“As Rajindra Hospital is a tertiary-level facility, and we cater to referrals and patients across Punjab, laparoscopic surgery at emergency was a need indeed,” he said.

“Perforation peritonitis, acute appendicitis and ruptured abscesses leading to peritonitis are the most common diagnosis encountered in the emergency. We will now deal with emergencies laparoscopically,” Dr Kumar added.

He further said, “Laparoscopic surgeries have speedy recovery as compared to the open ones. Moreover, laparoscopes are cosmetically appropriate and are preferred by the patients.”

Notably, the department also has a skill lab and virtual simulator for further training in laparoscopic surgeries.