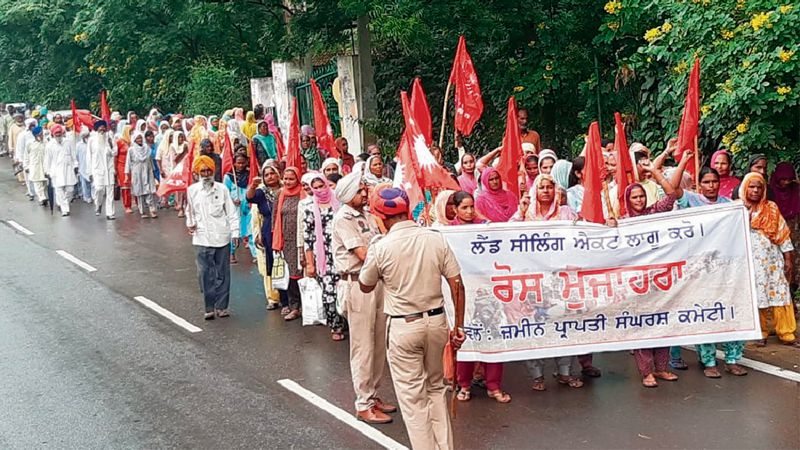 Members of the Zameen Prapti Sangharsh Committee hold a protest in support of their demands in Patiala on Wednesday. Rajesh Sachar

Activists of the Zameen Prapti Sangharsh Committee (ZPSC) today took out a protest march to the Deputy Commissioner’s office here demanding implementation of the Land Ceiling Act. The activists assembled at the PUDA ground, near Gurdwara Dukhniwaran Sahib, and later carried out a protest march to the DC office. They also held a sit-in outside the office of the Deputy Commissioner.

Gurwinder Singh Boran, Patiala zone president of the committee, said the government had introduced land reforms in 1952 and 1972 for distribution of land. “As the state has about 35 per cent SC population, but we have only 1.5 to 2 per cent of the land share,” he said.

Paramjit Kaur Longowal, zonal secretary of the committee, said according to the Land Sealing Act, one family can own only 17 acre of land.

“Due to lack of land holding we are unable to get loans from the government. As such, landless farmers and SC category people are forced to seek private loans at a much higher interest. Women, who are landless, are left at the mercy of microfinance companies”, the leaders said.