Patiala city to get canal-based water by 2023 : The Tribune India 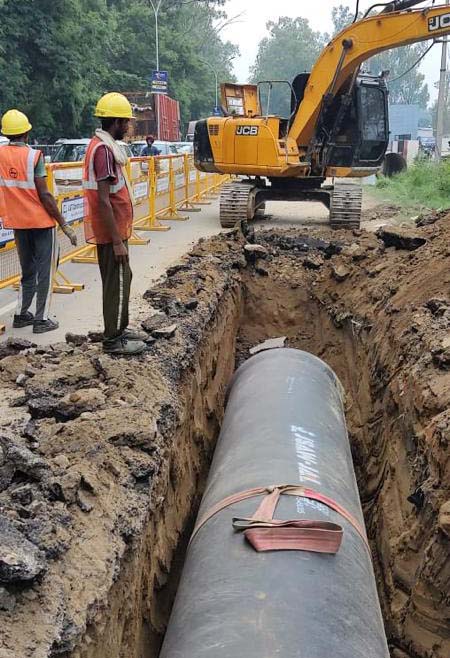 A water supply pipeline being laid in Patiala. tribune photo

A new pipeline in the city will ensure supply of canal-based clean drinking water. The pipeline will cover 312 km in the city. At present, the city gets water supply from government-run tube wells installed at 850 feet depth.

The MC is currently supplying water pumped out with tube wells. The Punjab Water Supply and Sewerage Board will instal pipelines in the entire city to provide canal-based water. Board officials said once the project was implemented, the city would receive clean drinking water from the Bhakhra canal.

“At present, the city’s water supply system is inefficient. Underground water is drawn with help of tube wells. Some areas have also witnessed leakage in water-supply pipelines due to various faults,” said MC officials.

“Water from the canal will be stored in 12 overhead and 16 underground tanks. Water will be supplied to the city from these tanks. The Punjab Water Supply and Sewerage Board will uproot over 312 km road length in the city for the installation of pipelines,” officials added.

Jugal Kishore, XEN, Punjab Water Supply and Sewerage Board, said, “The construction of overhead water tanks and underground reservoirs is going on. We have also started laying main pipeline. Earlier, a few permissions from the PWD Department were pending, which have been given. The MC has permitted us to carry out civil works in a phased manner.”

He said the department would also reconstruct roads after providing water supply connections to households. “The work is expected to complete by October, 2023,” he added.