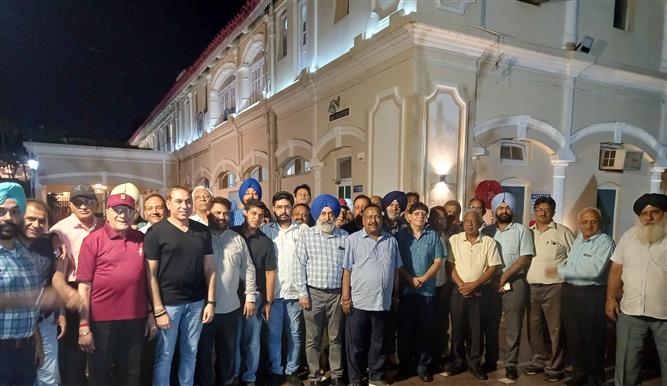 Members of Rajindra Gymkhana and Mahendra Club gather on the premises of the club in Patiala on Friday evening. Tribune photo: Rajesh Sachar

Elections to the prestigious Rajindra Gymkhana and Mahendra Club here have been marred over allegations of wrongful withdrawal of candidatures.

Over 100 members gathered on the club premises this evening and asked the club election committee to ensure smooth poll process. Sources said the members had decided to hold a protest against the panel, but changed the decision at the last moment.

‘Were trying to elect team unanimously’

}We were trying to elect the club team unanimously, but are unaware who signed the documents for withdrawal of candidatures and submitted them. Thus, we objected to it. — Vinod Sharma of Goodwill Group

A couple of days ago, a controversy had erupted after applications for withdrawal of candidature of few contestants were submitted.

Eighteen candidates are in fray for various posts of the club as per the final list of candidates issued by the six-member election committee. After scrutiny of papers and withdrawal of candidature, Deepak Kampani and Dr Manjit Singh of the Progressive United Group were left as the lone candidates for the posts of president and vice-president respectively.

Club members said documents for the withdrawal of Vikas Puri’s candidature for the post of president and Radhe Sham’s for the post of vice-president from the Goodwill Group were submitted. Vinod Sharma of the Goodwill Group said, “We were trying to elect the club team unanimously, but we are unaware of who signed the documents for the withdrawal of candidatures and submitted them. Therefore, we objected to it.” He said the election committee was yet to take a decision on the whole matter of allowing their two candidates to contest the election.

A member and candidate, Harpreet Singh Sandhu, said the gathering had sought a smooth election process on the remaining posts from the election committee.