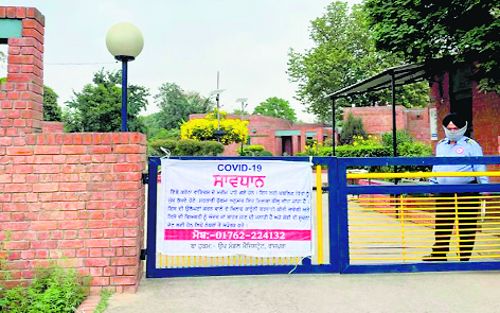 SOS Children’s Village, a shelter home at Rajpura, has been declared a micro-containment zone after 12 kids tested positive for coronavirus on Tuesday. Tribune photo: Rajesh Sachar

In the highest single-day spike since the outbreak last year, Patiala district today reported 424 positive cases of coronavirus. The total count of positive cases has risen to 28,155 since the pandemic broke out last year.

The tally of active cases has now risen to 2,885. Besides, seven persons have died of the infection over the past 24 hours taking the death toll to 688. Of 424 positive cases, only 42 were the contacts of positive patients.

Meanwhile, SOS Children’s Village, a shelter home at Rajpura, has been declared a micro-containment zone after 12 children tested positive for Covid. The Senior Medical Officer, Rajpura, said 130 persons, including staff and children, were tested. “We have tested everyone at the SOS village once. However, we will again test the inmates in a day or two.”

Meantime, power colony on the Badungar road had been declared a micro-containment zone after eight positive cases surfaced in the area.