Most succumb within 48 hours of admission

Amid the rising Covid-19 cases in the state, Patiala’s Government Rajindra Hospital reported 31 deaths due to the pandemic over the past 24 hours. With this development, the total toll at the hospital rose to 1,221 since the outbreak of the disease last year. This is the highest number of Covid deaths at the hospital since the deadly virus emerged.

Of the 31 patients, 14 were from Patiala, six from Mohali, four Sangrur, two Ludhiana and one each from Barnala, Fatehgarh Sahib, SBS Nagar, Ropar and Mansa.

Sources said the maximum deaths — 13 — were reported from the ICU of the Covid ward at the hospital. Doctors said 19 Covid patients died within 24 hours of the admission while nine passed away within 48 hours.

We admitted 50 patients in the past two days. Most of the deaths were witnessed within 48 hours of the admission. People were coming to the hospital in a critical condition. —Surbhi Malik, in charge, Covid isolation ward

Currently, around 300 patients are undergoing treatment at the hospital.

Meanwhile, Surbhi Malik, in charge, Covid Isolation Ward, Rajindra hospital, said, “We admitted 50 patients in the past two days. A majority of deaths were witnessed within 48 hours of the admission.”

She said the people were coming to the hospital in a critical condition. 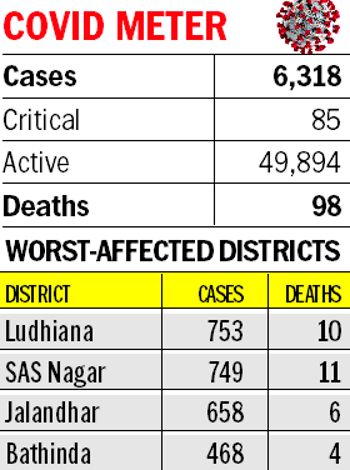 Surbhi said the proportion of moderately sick patients was much higher than those in “very sick” and “critical” condition in the previous wave. “It is reverse now. The level three patients (very sick and critical) are more in number this time.” The hospital had all necessary equipment and facilities, including specialist doctors and ventilators, she pointed out.

She said as per the data collected from inside the hospital, the people who had taken two doses of vaccine were hardly among the critical patients. “This suggests that the vaccination goes a long way in reducing mortality and extreme sickness,” she said.

Following the rising deaths, the mortuary that has the capacity of 14 bodies is running out of space.

Meanwhile, Dr Rajan Singla, Principal, Government Medical College, said, “We have enough space at the mortuary. Apart from 14 chambers, we have one more room where more bodies can be kept.”

The Patiala district administration has started utilising the services of the Army. In all, 30 Army men on Monday joined duty and will help manage bodies in addition to looking after the sick. “Thirty Army men will help paramedics look after Covid patients at Rajindra Hospital, Patiala," said DC Kumar Amit while reviewing the arrangements. tns