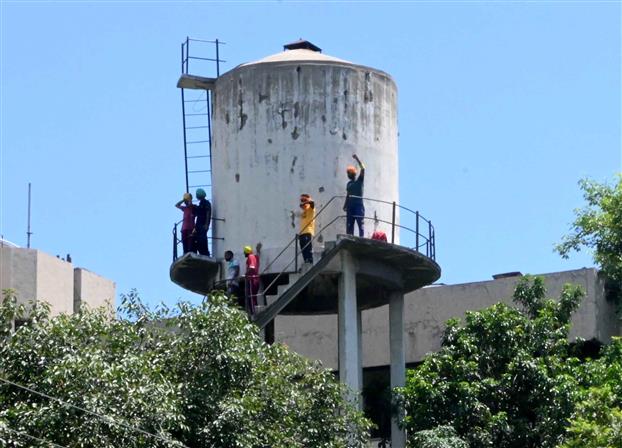 Members of the lineman union protest atop a water tank in Patiala. Tribune photo

Aspirants for the posts of lineman on Friday blocked all gates of Punjab State Power Corporation Limited (PSPCL) headquarters in the city. They also climbed atop an overhead water tank as a mark of protest demanding recruitment as assistant linemen in the power corporation. Aspirants said they had been protesting in Patiala for days’ altogether, but to no avail.

Malkit Singh, one of the linemen, said they had completed their apprenticeship in May, but rather than being hired on regular jobs, the department decided to hold a test for the recruitment of 1,690 linemen. He said employees want that the PSPCL should hire them on the basis of apprenticeship, a protocol followed earlier.

Kulwinder Singh of the linemen union said they had been protesting since July 27. “The PSPCL has decided to hold an eligibility test for hiring linemen on 1,690 posts. All previous recruitments in the PSPCL have been conducted through apprenticeship programmes,” he said. He alleged that the PSPCL was conducting the exam in order to hire applicants from other states.

He said protesters had held meetings with government officials, including representatives from the CM’s office, but to no avail. “Some linemen carrying petrol bottles climbed atop an overhead water tank at the head office here today. We will continue our protest till our demands are not met,” he added.