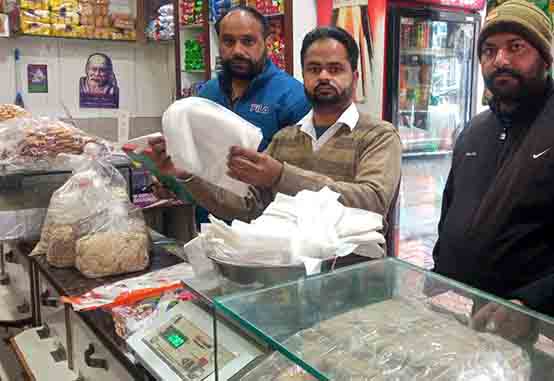 MC officials during a challan drive to curb sale of single-use plastic at a shop in Patiala. A Tribune photograph

While the Municipal Corporation has been acting against shopkeepers for use and sale of single-use plastic products, including carry bags, polythene bags, plastic pipes and others, it is yet to curb manufacturing, stocking, distribution and import of the banned products in the city.

The banned products are being sold openly at the grain market, sabzi mandis and other places. The corporation has failed to act against those stocking the material. A city resident

This is despite the fact that the Punjab Pollution Control Board (PPCB) had issued directions to the Police Department, secretaries of various other departments and had held state and district-level campaigns against the sale and use of single-use-plastics.

On Tuesday, a team of corporation officials had issued 6 challans for use and sale of single-use plastics. An MC official said, “We are carrying out regular drives and issuing challans to those violating the orders.”

The situation around rampant sale and use of single-use plastics prevails despite the fact that the PPCB had issued necessary directions under the provisions of the Environment (Protection) Act regarding the enforcement of the ban to the Departments of Local Government, Rural Development and Panchayats, Deputy Commissioners, regional offices of the PPCB and others last year. It had sent communications to the Police Department to curb cross border movement of banned single-use plastics. It also held awareness programmes regarding it at various government schools, with various Urban Local Bodies in association with industries and also held various district and state-level campaigns.

A city resident said, “The banned products are being sold openly at the grain market, sabzi mandis and other places. The corporation has failed to act against those stocking the material.”

MC officials meanwhile said they had been taking action against those found using single-use plastics in Patiala. “Corporation teams are visiting different markets in the city and issuing challans for using and selling banned plastic products. A factory outlet was also issued a challan after banned plastic carry bags were found being manufactured at the site in November,” an official said.