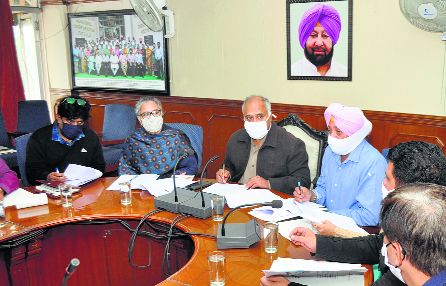 Mayor Sanjeev Sharma addresses a meeting of the Finance and Contract Committee at the Municipal Corporation office in Patiala on Monday. Tribune photo: Rajesh Sachar

Meanwhile, in view of the lapses in following timetable by employees, corporation’s senior officials said, “Employees should be in office at the given hour early in the morning. Attendance of all employees will now be monitored by Joint Commissioner Lal Vishwas.”

The F&CC has also cleared installation of lights at the rehri market and Rose Darden. The panel also gave a go ahead to the construction of public toilets near at an estimated cost of Rs27.88 lakh. Besides, the MC will install seven new tube wells in the city at an expenditure of Rs21 lakh each.