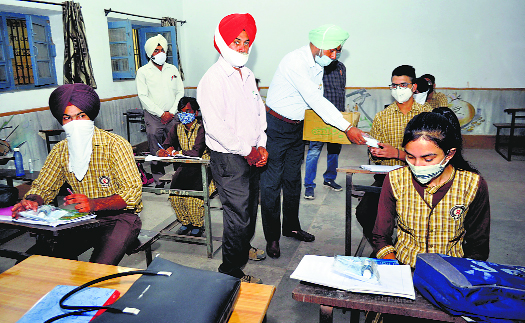 Face masks and sanitiser being given to students at Government Co-ed Multipurpose Senior Secondary School in Patiala. Rajesh Sachar

Around 30 per cent students from Classes IX to XII reportedly attended classes on the first two days of reopening of government schools in the district.

District Education Officer (DEO) Harinder Kaur said that around 30 per cent students attended schools in the first two days. She hoped the attendance would improve in the coming days.

She said: “The attendance will definitely improve in the coming days. I think a majority of the students will start coming to schools in a week. We are taking all precautions for the safety of students.”

The teacher organisation said they want the government to start school for remaining classes also. — TNS