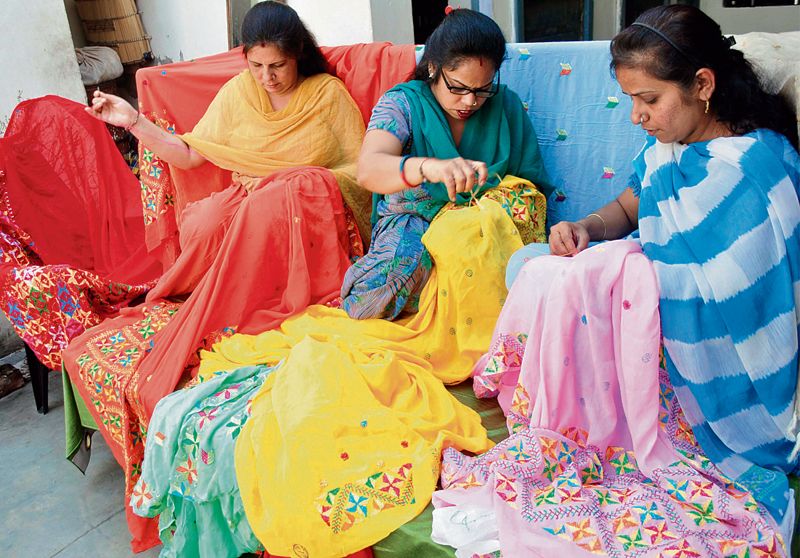 Three women of a family give the finishing touches to a phulkari dupatta in Patiala. - File photo

A study carried out by professors of Punjabi University, Patiala, has found that low remuneration has made handmade phulkari (a traditional art specific to the Patiala region) an economically unviable option for many young women who do not want to take it up as a means of livelihood. The research project report that was released on Monday highlighted that the artisans were not satisfied with their income and were worried about the diminishing demand of handmade phulkari in the local market.

The research was sponsored by the Centre for Women’s Development Studies, New Delhi. Professor Ritu Lehal, Director, Women’s Studies Centre, who headed the research programme carried out primarily in villages of Patiala district said some artisans reported making eight rupees per flower and three hundred rupees from one Phulkari, which takes 12 to 15 days to complete.

The university faculty members studied the working and earnings of 120 artisans divided in two groups— those from training centres and those artisans working since generations.

They found that 52 per cent of the respondents were not satisfied with their income from phulkari, while 37 per cent had average satisfaction on the same.

Ritu Lehal said, “About 55 per cent artisans observed fewer sales while 45 per cent reported less profit margin which is directly related to sales.” She added that machines produce more outfits per day which had lowered the price of the product and added to reduction in sale of traditional handmade phulkari.

Interestingly, while machine made phulkari was found more popular among customers in India, handmade phulkari was popular among overseas customers. “Phulkari is now made for profit as a commodity. It is being sold in both local and foreign markets”, she said. Also, of 120, only 10 artisans were aware of online selling platforms.

Apart from suggesting policy making and providing raw material to phulkari artists on subsidised rates, the officials said there was a need to create awareness among masses about traditional phulkari of Punjab. They said artisans should be helped to sell their products directly to the customers without the interference of middlemen. “Handicrafts museum should be set up representing phulkari culture while self-help groups should be established among artisans of villages”, they said.