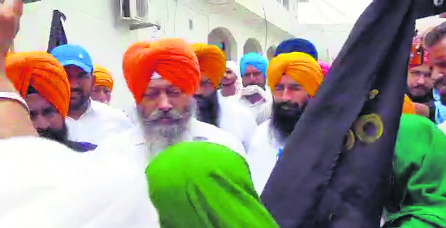 When Chandumajra reached the function venue at Gurdwara Nimm Sahib in Akkarh village, protesters, including youths and women standing outside, waved black flags. They demanded that Chandumajra should come of the venue and answer their questions.

Sources say Chamdumajra was eyeing SAD ticket from Ghanaur. His recent visits to various parts of the constituency were initial steps before he staked claim from the Assembly segment, presently held by the Congress, the sources added.

Farmer unions have already opposed political events in villages. They claimed that no politician from any party would be allowed to address residents of any village till farmers were protesting on Delhi borders. “We have already announced that no politician will be allowed in the village till farmers’ protest is on. However, these political leaders are so power hungry that instead of showing solidarity with farmers, sitting on dharna at Delhi borders from past many months, they continue to attend political events,” said Rajinder Kaur, senior leader of Krantikari Kisan Union.

Earlier, when Chandumajra, along with his supporters, reached the village, members of several farmer unions gathered outside the function venue and protested by showing black flags.

Meanwhile, sensing gravity of the situation, SAD supporters escorted Chandumajra out of the village without confronting protesting leaders of farmer unions.

Later, Chandumajra said, “The BSP-SAD coalition will prove vital and the BJP and the Congress will face the heat in the upcoming polls.”

On the protest against his visit, Chandumajra added that majority of protesting leaders were outsiders. “Everyone knows that even during the Covid times I stood with farmers and have always been taking up their issues with the government,” Chandumajra added. When asked if he was a contender from Ghanaur, Chandumajra said, “The party has already decided that only winning factor will be the criteria for ticket allocation. I am ready to contest from wherever the party decides to field me.”