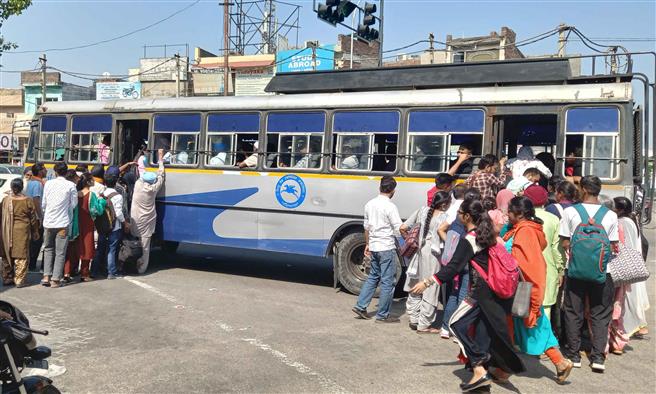 Commuters scramble to board a bus in Patiala on Monday. Rajesh Sachar

Miffed over the untimely delay in disbursement of monthly salary, hundreds of Pepsu Road Transport Corporation (PRTC) employees, on Monday, locked the main gate of Patiala bus stand. Employees staged the sit-in at the main gate of bus stand.

Protesters raised slogans against the Transport Minister and government for failing to release their monthly salary. Passengers had a harrowing time as chaotic scene were witnessed outside the bus stand with scores of buses being parked on the Patiala-Chandigarh Highway, leading to a snarl-up.

The protesting employees said they had not received their salary of August and September so far. The protesters claimed hadn’t been receiving timely salaries ever since the Aam Aadmi Party (AAP) came to power.

Meanwhile, PRTC officials, passing the buck, said the government still had to reimburse over Rs 200 crore to the state transport undertaking – PRTC. Nirmal Singh Dhaliwal, convener, PRTC workers Union, said, “When festival season is around the corner, thousands of PRTC employees are without their salary. This AAP government has failed to reimburse around Rs 200 crores of free-women travel scheme and other welfare schemes.”

The protesting PRTC employees called off the stir in the evening after senior officials of PRTC assured —after a meeting — that salaries would be disbursed in the next few days.

Passengers bore the brunt of the melee as they waited to get to their destinations. Bus services were paralysed in the entire Malwa belt as the bus stand is the biggest terminal in the region. An elderly woman, Kulwant Kaur, said: “I have to reach Nabha. I am stuck at the Patiala bus stand as protesters have stopped the services. There is nowhere else to go.”