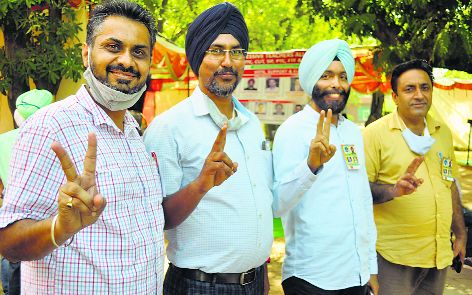 The Progressive Teachers’ Alliance (PTA) made a clean sweep of all posts of office-bearers in the Punjabi University Teachers’ Association (PUTA) elections held on the campus today.

Maninder Singh from the Department of Computer Science won the post of vice-president with 285 votes having defeated his competitor Gurjeet Singh Bhathal, who won 206 votes.

The PTA grabbed all four office-bearer posts with huge margins. Deol defeated his competitor Varinder Kumar Kaushik of Punjab School of Law by a margin of 119 votes, while another competitor for the same post, Pankaj Mohindru, trailed behind with only 28 votes. A total of 511 votes were cast out of the total 553.

Balraj Singh, assistant professor, Department of History, of the PTA alliance competing for the post of joint secretary won with 267 votes against Lal Chand from the Department of Computer Science and Engineering, who got 230 votes.

The newly elected PUTA president Nishan Singh Deol said, “This is not only the victory of the alliance, but of the whole teaching community. We will deliberate on the issues such as promotions of teaching faculty and other financial and administrative problems with the government and the university administration.”

Varinder Kumar Kaushik of the TUF said the Vice-Chancellor intervened in the elections and therefore, his team has won. “We accept the mandate given by the teachers. We will also analyse how votes were cast.” — TNS