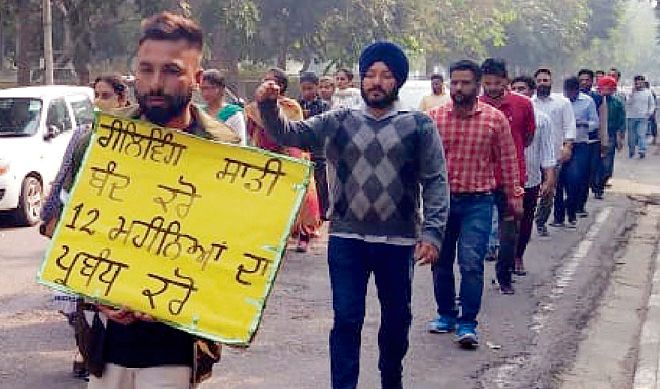 Adamant on their demands of pending payments among others, the guest faculty of constituent colleges of Punjabi University have started hunger strikes on the university campus. Faculty members said they would observe black Diwali and hold protest marches on the campus wearing black ribbons tomorrow.

The protesters are awaiting their payments for more than one year. They have been holding protests outside the office and residence of Vice-Chancellor for the last 17 days. Outsiders, including members of Bhartiya Kisan Union (Krantikari), also joined their protest on the university campus.

Dr Gurdas Singh, one of the guest faculty teachers, said, “We have been waiting for our payments for over one year, but the university has failed to resolve our concerns. In a Syndicate meeting held in March it was decided to increase our payment for lectures to Rs 30,000. The decision has not been implemented yet.”

“Some teachers will hold regular hunger strike on the university campus from today. Till now, the university has even failed to release salaries of regular employees also,” he added.

“We will observe a black Diwali and hold protest marches on the campus wearing black ribbons tomorrow,” he said.

The protesters alleged that they had repeatedly tried to meet the VC, but failed in their attempts. Now, they have started pasting posters on the campus with the message “The VC is missing”.