To stop all work from tomorrow if notification not released 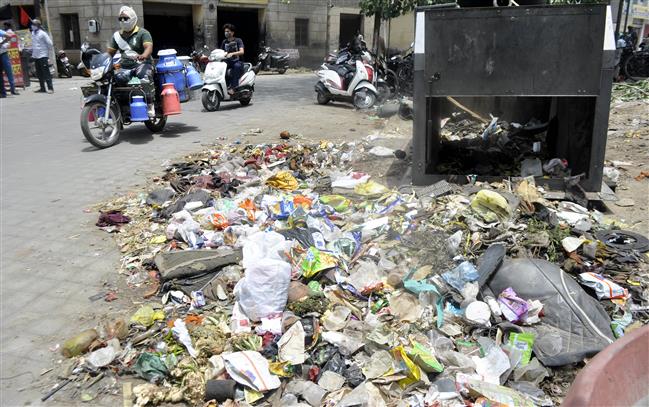 Garbage strewn along a road in Patiala on Monday. Rajesh Sachar

Adamant on not to rely on verbal assurances, sanitation workers of the Municipal Corporation (MC) associated with Cleanliness Worker Union Punjab have decided to continue their agitation for regularisation of services. They staged a dharna in the city today. Workers said they want the government to issue a notification instead of giving assurances. Workers have also decided to intensify their protest and stop all cleanliness work from Wednesday onwards.

Sanitation workers have been holding protests in the city and at other places since May 13. Their main demands include regularisation of jobs, end of ‘thekedari’ system, along with promotion of previously hired employees, and release of pending dearness allowance arrears.

Meanwhile, officials in the state government have given verbal assurances that services of all sanitation workers will be regularised.

Sunil, city unit president of the Cleanliness Worker Union Punjab, said, “We continued our protest today as the government has only issued verbal statements. We can’t rely on such assurances. Instead, the state government should release a notification in this regard.”

“Sanitation workers have been protesting for the past many days. They will continue their agitation in the coming days too,” he added.

“We have been doing our work despite protest. But, we will intensify our agitation from Wednesday and stop all work if the government does not release notification regarding our demands,” he said.

“The Municipal Corporation has already issued notices to leaders of the association demanding clarifications over their protest. We have submitted our responses, but the protest will continue until our demands are met,” he added.