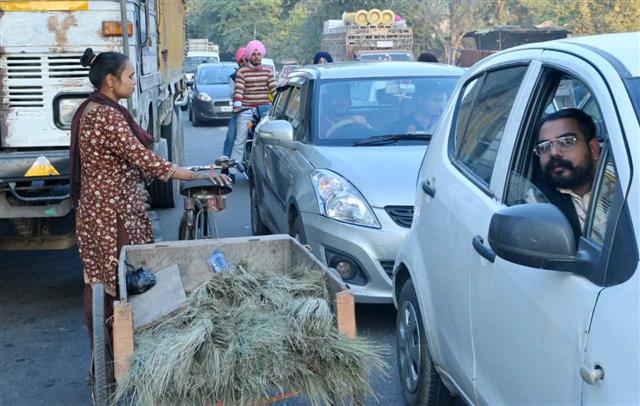 Vehicles stuck in a jam on the Sangrur road on Friday. Rajesh Sachar

The city today witnessed a traffic mess due to two protests held simultaneously — one on the Patiala-Chandigarh road and the other on the Patiala-Sangrur road. The commuters heaved a sigh of relief as both the protests ended by afternoon after the administration and the protesters reached amicable solutions.

Farmer unions associated with the Bharti Kisan Union (Sidhupur) had been protesting at the Dhareri Jattan toll plaza on the Patiala-Chandigarh road for over a week. The farmers had blocked the only road that directly connects Rajpura to Patiala and is an important route for commuters travelling to Sangrur and Bathinda. The road blockade left the commuters harassed for days.

The farmers called off their protest today after they reached an amicable solution with the administration.

On the other hand, residents of Kaidupur village on Thursday launched a protest on the road connecting Patiala to Sangrur after the village sarpanch died by suicide. The protest continued throughout the night and left the road completely jammed. It was lifted at 3 pm today after the registration of a case against the panchayat secretary and a junior engineer, who allegedly abetted the sarpanch’s suicide.

A commuter said, “The traffic mess made it extremely difficult for the people to go about doing their business. It also affected the city’s traffic flow.”

Farmer unions associated with the BKU started a protest at the Dhareri Jattan toll plaza over a week ago in support of their demands. The farmers called off the protest on Friday after negotiations with government.

Village residents stage a sit-in demanding registration of an FIR against a JE and panchayat secretary for allegedly abetting sarpanch Dildar Singh’s suicide on Thursday. The protest ended on Friday after two were booked.