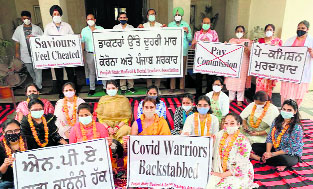 Members of the Punjab State Medical and Dental Teachers Association protest against delinking of the non-practising allowance from the basic pay, in Patiala on Friday. Tribune photo: Rajesh Sachar

Medical and dental doctors working in government medical and dental colleges in the city today started their indefinite protest against failure of the Punjab Government to rectify anomalies in the non-practising allowance (NPA) and its restoration in the original form.

Ten medical dental teachers from different departments will hold a sit in protest every day. The OPD and elective surgeries will be stopped, along with daily suspension of administrative duties by the faculty, routine medico-legal services and classroom teaching of medical students.

Dr DS Bhullar, state general secretary, Punjab State Medical and Dental Teachers Association (PSMDTA), said, “The association has categorically requested the Punjab Government at all levels, including group of ministers and committee of Principal Secretaries, that the NPA of government doctors must be restored to original 25 per cent of the basic pay. It should be linked to the basic pay as earlier. Also, it should be considered as part of the pay for the calculation of dearness and house rent allowance etc.”

“Further, the academic allowance of doctors should also be restored and fixed at Rs2,500 along with conveyance allowance of Rs2,000,” he added.