Dump garbage in front of Vice-Chancellor’s office, gates of the campus to protest new contractual rules of service 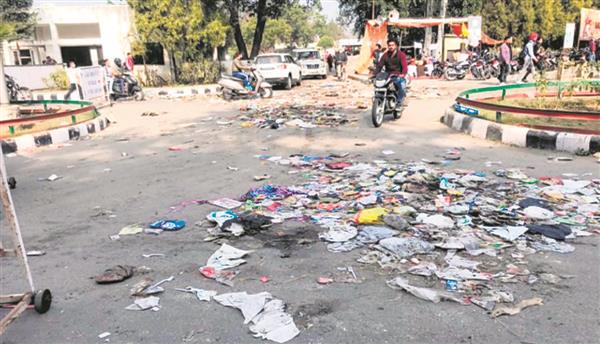 Garbage dumped by protesters in front of the main gate of Punjabi University in Patiala on Tuesday. Photo: Rajesh Sachar

Cleanliness workers (employed on a daily wage basis) of Punjabi University littered the campus with garbage for the second consecutive day today to mark their protest against the university authorities. The protesting workers dumped garbage at the administrative blocks, the Vice-Chancellor’s (VC) office and at the gates of the campus.

The workers are protesting changes in the contractual rules of service. In fact, The university is giving a compulsory five-day break after the end of every contract period of the employees, which is said to be the reason for the protest.

The university officials today reportedly tried to clean the campus with their regular cleanliness workers, but the contractual workers opposed it and a face-off ensued. The police had to be called in to defuse the situation.

Jatinder Singh, president of the workers’ union, said earlier, the university renewed their contract after every 68 days with a one-day break, but now, as per the new orders, the contract would be renewed after 63 days with a break of five days, thereby, leaving them without pay for many days. He said: “The change will render us without payment for many days at a stretch, given Sunday a holiday. In February, for instance, we will be left without work for nine days.”

He alleged that the decision of the university authorities was a mental harassment, which might force them to leave the job. They added: “We will hold a regular protest on the campus if the authorities don’t agree to our demands.” The police threatened them with cases against them, said the protesters.

Meanwhile, officials of the university said they were in talks with the protesters and the situation would be resolved soon.