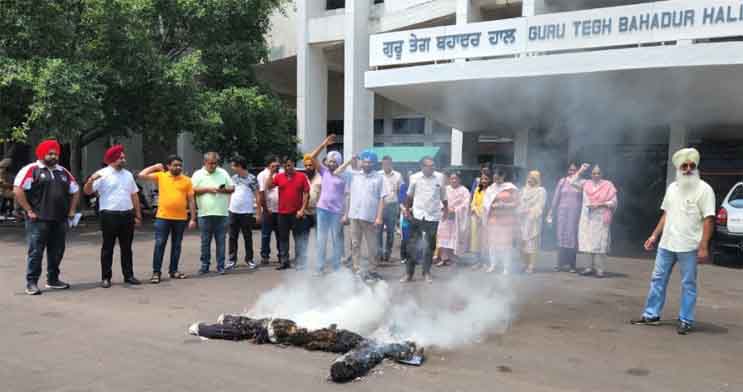 Punjabi University faculty members hold a protest over delay in disbursal of salaries in Patiala on Thursday. Tribune photo

Faculty members of Punjabi University, Patiala, held a protest and burnt the effigy of Vice-Chancellor Professor Arvind over the university’s failure to disburse salaries and address their demands. The salaries of the faculty members have been lying pending for the past two months now.

The faculty members said they had submitted the memorandum regarding their demands related to pensions, arrears, salaries, promotions and others to the university. PUTA President Bhupinder Singh Virk said the university administration had been ignoring the memorandums.

He said, “The university had deliberately rejected promotions of faculty members. We have been writing letters to the Vice Chancellor repeatedly, but no meeting has been called to address our issues. This is why we protested and burned the effigy today.” The PUTA president also levied allegations against the University Vice Chancellor of ill-treatment of faculty members.

The members however demanded that the University should release the pending salaries of the employees and pensions of retired officials at the earliest, else they would intensify the protest.

Another faculty member at the department of Electronics Engineering on the campus, Professor Pankaj Mohindru said, “The prestigious Punjabi University should also be looked after by the state government. The teaching faculty is waiting for salaries of over two months now.”