An elderly couple gets vaccinated against Covid at the CHC, Tripuri, Patiala. Photo: Rajesh Sachar

Given the record number of positives cases, the second Covid wave is evidently more infectious than the first one. The district today reported 338 corona cases. This is the second highest spike in a single day. 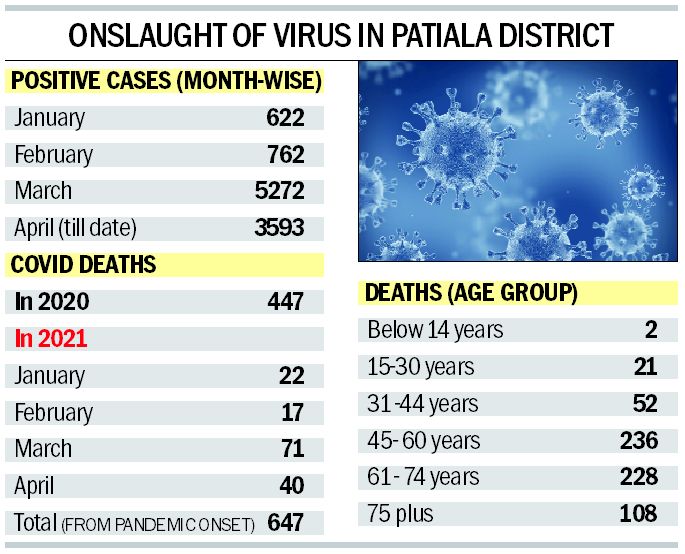 The Health Department said the second wave was more infectious than the first one because the virus had already mutated.

District epidemiologist, Dr Sumeet Singh, said it was clear from the spread of infection that the second Covid wave was more infectious as compared to the first.

In some cases, entire families tested positive, which was not the case in the first wave, he said.

Meanwhile, the Patiala Civil Surgeon, Dr Satinder Singh, said, “Highest positive cases have been reported in March since the outbreak of the pandemic. The way Covid is spiking, positive cases may be higher in April. The second wave is more infectious. However, it may be less fatal if people report to nearest health centre in time.”

Besides, six people died of Covid during the past 24 hours. This has taken the Covid toll in the district to 652 since the pandemic outbreak.

Of the 338 positive cases detected today, only 21 were contacts of the past positive patients, while 317 were reported from elsewhere.

Patiala city had reported 176 cases, while Rajpura 39, Nabha 32, Kallon Majra 21, Harpalpur 20, and Bhadson and Samana 14 each, Dr Satinder added. Besides, 10 positive cases were reported from Shutrana and seven from Kauli, Dr Satinder said.

Health officials said the positivity rate in the district was around 10 per cent.