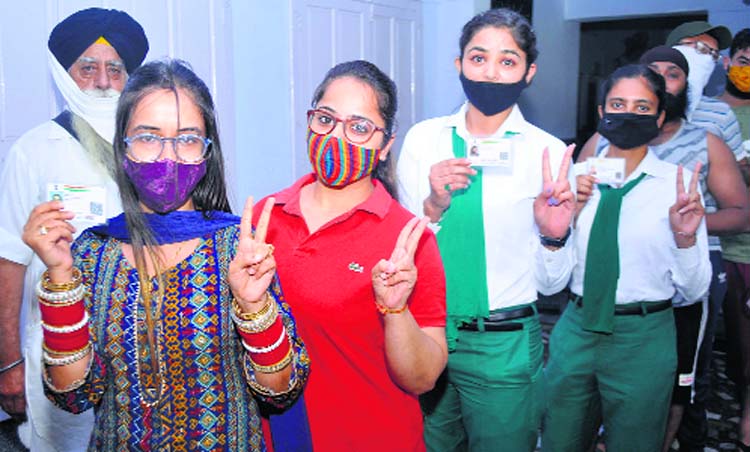 Beneficiaries before receiving a dose of the Covid-19 vaccine in Patiala. - File photo

Around 150 beneficiaries in each village will be vaccinated, and each block of the district will be covering 10 villages in a week during the first phase of this special vaccination campaign for the rural belt.

The administration has decided to initially select only those villages where vaccination has already reached about 40 per cent.

Sources said overall vaccination in the rural belt was about 22 per cent. In some villages of the district, the vaccination figures were said to be very dismal.

The announcement of the special drive came after Patiala Deputy Commissioner Kumar Amit held a meeting with officials of the Health Department, Panchayat Department, Revenue Department, Agriculture Department and Cooperation Department, including SDMs of the subdivisions concerned. During the meeting, the Deputy Commissioner directed the various departments to cooperate with the Health Department in the vaccination drive being carried out in the villages. He asked the officials to ensure that the immunisation programme was announced one day in advance in the village concerned. He advised that Covid vaccination might be expedited by involving the educated youth of villages in this campaign.

The district administration would start a special checking of restaurants/hotels, cafes, dhabas and gyms to ensure that the staff working at these establishments have got their first dose of the Covid vaccine, said ADC (G) Pooja Sayal Grewal.

She added two teams, led by AETC (GST), had been formed to make sure that these ventures followed the guidelines of vaccination. Besides, these two mobile teams would be accompanied by immunisation teams.

The administration will start an ‘On-call vaccination drive’ on Friday to cover the urban areas of Patiala city. ADC (G) Pooja Sayal Grewal said any locality having five or more persons ready to be immunised, a team would approach them for on-the-spot vaccination. However, they would have to fix the schedule by dialling district control room number 0175-2350550 in advance, said Syal.