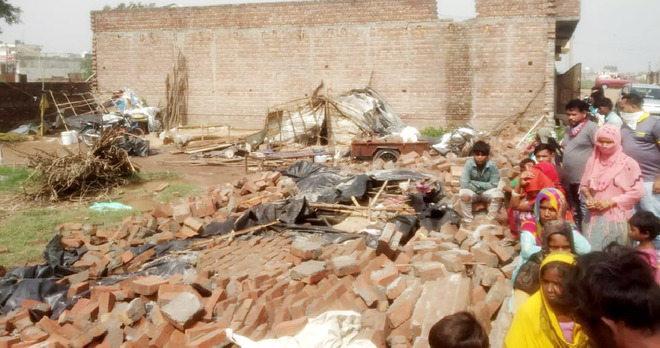 People at the site of a wall collapse at Saidkheri village. Photo: Rajesh Sachar

Seven persons, including two children, died in the storm-related incidents in the district on Thursday night.

In one incident, four members, including two children, of a migrant labourer family died at Saidkheri village. The incident took place near Rajpura when a brick wall fell on their hovel. The deceased have been identified as Girish (25), Ram Shree (30), Madhu (10) and Radhika (6).

In another incident, a farmer died when a roof buckled on him at Ganda Kheri village. It has been learned that the farmer had gone to his fields on Thursday night to turn on the tubewell for the paddy plantation. He had to take shelter from windy weather in the engine room the roof of which caved in after a tree fell on it. The deceased farmer has been identified as Gurjeet Singh.

Besides, one person died after a parked container — owing to the storm — had turned over and fell on him, while he was taking shelter from the storm to the side of the container near Babbar Dhabha on the Rajpura road. The deceased has been identified as Shekhar Gir, a resident of Rajpur town.

Similarly, a migrant labourer died in Sanour after a wall fell on him due to high-velocity winds that hit the district on Thursday night. It has been learnt that around one dozen people have been injured in this storm. Meanwhile, rough weather damaged electricity poles, property and uprooted many trees.

Manjeet Singh Nial, district president, BKU (Ugrahan}, said: “The storm has damaged the electricity poles and transformers in villages, which would affect the electricity supply to the fields.”