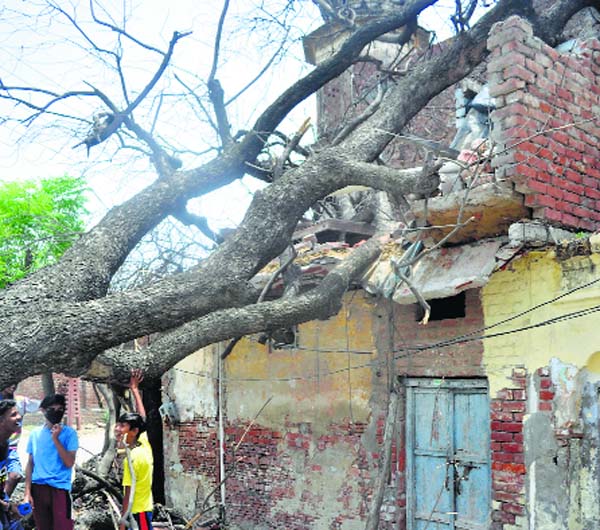 A house damaged by a tree uprooted during the storm in Patiala. Rajesh Sachar

Surinder Mohan Chopra, SE, PSPCL (South), said, “We are still restoring electricity in various areas of the city. Densely populated areas are being catered to at the earliest.”

A car was also damaged in the city though no one was hurt as a tree fell on it. Another house was damaged by a tree at Sanauri Adda. The boundary wall of the Miranpur Constituent College, Punjabi University, also collapsed in the storm, said officials.

Earlier, the Meteorological Department had issued a warning of strong 40 kmph to 50 kmph winds and rain yesterday evening. Officials said the doppler weather radar on the Punjabi University campus was nonfunctional for a couple of hours yesterday afternoon for yearly maintenance.

The Meteorological Department has forecasted rainfall on June 11 to 14, along with thunder, lightning and 40 kmph to 50 kmph winds in Patiala, SAS Nagar, Chandigarh, Rupnagar, Hoshiarpur and other areas.