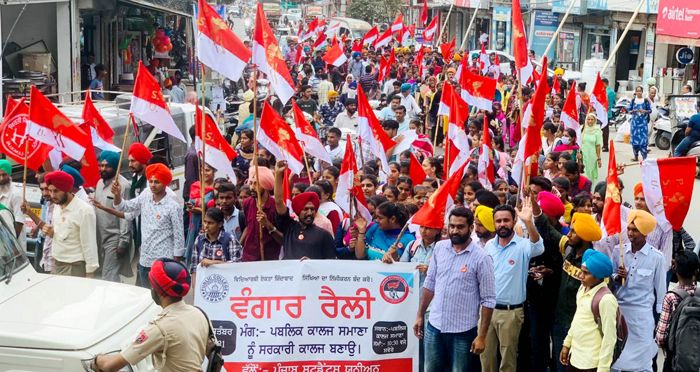 Members of the PSU hold a protest march in Samana on Thursday. Tribune photo: Rajesh Sachar

College students associated with the Punjab Student Union (PSU) and other organisations today held a rally outside Public College, Samana, and a protest march in the city for their demand of converting Public College to government institution.

Students pointed out that the state had a population of 2.80 crore, but only 47 government colleges. “There are more colleges in Haryana and Himachal, which otherwise have less population in comparison to Punjab,” said students.

There was not even a single government college in Samana due to which people were forced to send their children to Patiala for higher education, students added.

Amandeep Singh of the PSU said, “Earlier, we had given a memorandum at the SDM office. Today, the protest rally continued till afternoon following which a march was held throughout the city.”

Leaders and members of other organisations, including Kirti Kisan Union, the BKU and others, also participated in the protest.

They said residents of over 15 villages participated in the protest, along with students. Leaders said they would hold a state-level protest at the district administrative complex on September 15.