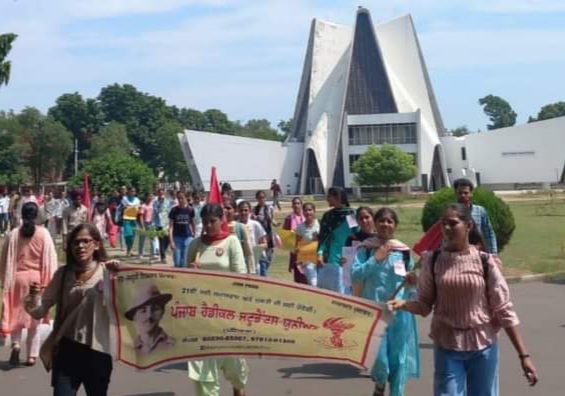 Members of the PSU hold a protest to press for their demands. Tribune photo: Rajesh Sachar

Students of Punjabi University’s five-year integrated courses have started facing issues over lack of rooms and basic facilities in the hostels. While the students held a protest over the matter today, university officials said they were unable to construct a girls’ hostel due to a ban imposed on the same by the Punjab Pollution Control Board (PPCB).The university had started the five-year integrated courses last year.

Students said the university had started the five-year integrated courses last year but had failed to provide enough hostel accommodation for students. “As of now, only one-fifth of the students enrolled in each five-year integrated course are able to get hostel accommodation. Many students from far-flung areas fail to get hostel room due to the same,” Rashpinder Jimmy, a student leader associated with the PRSU said.

Students said the facilities at hostel premises were deplorable. “Broken tiles and toilet bowls seem to be a common sight at Ambedkar girls hostel. Various pipes leak at all times. They need to be repaired,” students said. They pointed out that the university had aimed to construct a girls’ hostel years ago, but the same is pending.

“There is a need for a girls’ hostel on the campus. Therefore, we are looking at immediate alternate measures according to which the Registrar’s bungalow and a few other places will be converted into girls hostels. The PPCB has imposed a ban on construction work on the university campus due to the latter’s failure to get required sanctions from it in the past. Now we are working on getting the ban removed to carry out the construction work”, he said.