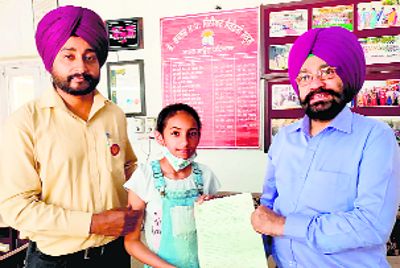 Vikram Dev, state president of the Democratic Teachers Front, said every government employee should admit his or her wards to government schools.

He said being a union leader, he should practice what he preached. “If I don’t trust government schools who else will. I believe that every person, who gets salary from the state government, should enrol his or her wards in a government school. Politicians and IAS officers should also follow suit. “

Dev clarified that instead of forcing the decision on her, he rather convinced her. “My daughter, who had been studying only in private schools so far, is convinced that government school teachers are more qualified than their counterparts in private schools,” he said.

Meanwhile, Anhad, the daughter of Vikram Dev, said: “All facilities available in private schools are very much there in government schools. Besides, teachers are highly qualified and experienced.”