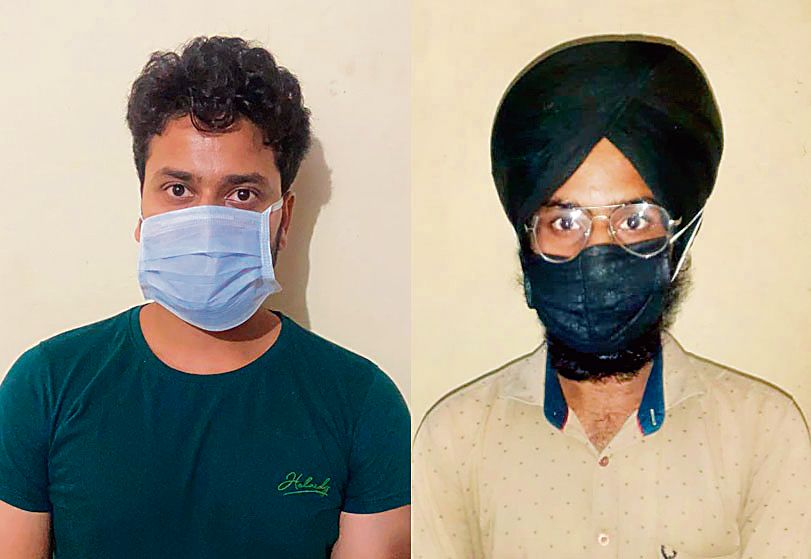 The suspects, who have been arrested for spreading rumours about Covid, in Patiala on Sunday. Tribune photo

A social media influencer, who has 60,000 followers on Instagram, has been arrested by the Patiala police for spreading rumours about Covid on the social media.

The suspect, Greesh Bhatt, had reportedly uploaded a video on his Instagram account yesterday, alleging that the Health Department and the police were deliberately reporting people as Covid positive. Bhatt, who had also worked in Amir Khan-starrer movie ‘Dangal’, had alleged in the video that doctors had been stealing organs. In his video, he had termed the Covid crisis a scam and made an appeal to the people not to visit hospitals at any cost.

The health teams and the police have already been facing resistance from people while collecting samples.

The police have booked Greesh Bhatt under Section 188 of the Indian Penal Code and 54 of the Disaster Management Act. The police said Bhatt had already been arrested and further investigation was underway.

On the same ground, a 22-year-old youngster was also arrested by the police for spreading rumours. The suspect has been identified as Sarabjot Singh. He had posted a message in a Facebook group in Patiala regarding testing of Covid-19, which showed the Health Department and the police in a bad light. Both cases were being investigated by City-II DSP Sourav Jindal.

Patiala SSP Vikramjeet Singh Duggal said residents should not pay heed to rumours and cooperate with health officials and the district administration to win the fight against Covid.

Till now, the police have registered six FIRs for spreading fake rumours regarding Covid, including one for an attack on doctors. Five persons have been arrested so far.