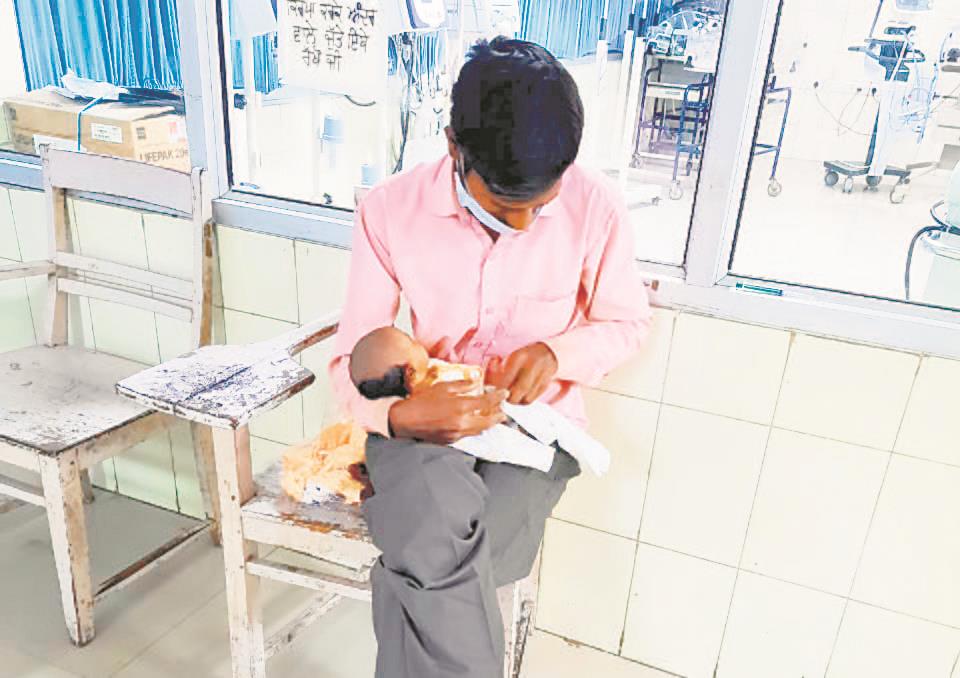 Shyam Sundar with his baby.

In a society still battling female foeticide, a father has been staying put outside the gynaecology ward of Government Rajindra Hospital to spoonfeed his newborn girl. He has been performing this heart-warming task because the mother of the newborn has tested positive for Covid and has already been shifted to an isolation ward.

A doctor at Rajindra Hospital

‘To bring change, we need such persons’

It is common to see parents getting upset over the birth of a girl child. However, Shyam Sundar’s story is different. We need more such persons to bring a lasting change in society.

The father, Shyam Sundar, has to sleep on the road at night as he is not being allowed to sleep in the gynaecology ward with his daughter.

Shyam Sundar has to go into the ward after every two hours to spoonfeed and make his daughter burp, as recommended by doctors. The doctors at the hospital said as he was a male, he could not be allowed to sleep inside the ward.

They said it was a preterm birth and the baby was taken to NICU following respiratory distress. Meanwhile, the mother tested positive for the coronavirus and had to be shifted to the isolation building. Talking to The Tribune over the phone, Sundar said: “The doctors have asked me to spoonfeed my daughter every two hours. Therefore, I have to sleep on the road outside the hospital.”

Sundar, who hails from Uttar Pradesh, said he worked as a labourer in Patiala.

A doctor at the Paediatrics Department said: “I was moved by the unconditional love of a father for his daughter.” In her social media post, the doctor said it was feast for the eyes to watch him (Shyam Sundar) take care of his daughter: feeding her and changing her clothes. “It is common to see parents getting upset over the birth of a girl child. However, Sundar’s story is different. We need more such persons to bring a lasting change in society,” the doctor said.