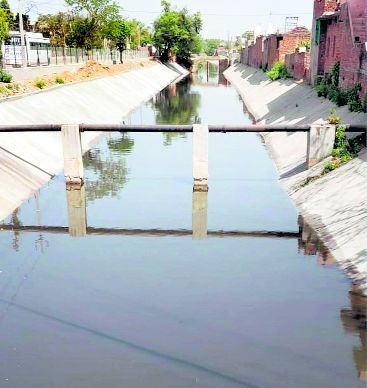 A view of Jacob Drain in Patiala on Monday. Tribune photo: Rajesh Sachar

Residents living in the vicinity of Jacob Drain and the eastern drain can now breathe a whiff of clean air. The Drainage Department here today claimed to have completed the work of cleaning and covering both the drains.

After years of disposal of garbage into the two drains, the Municipal Croporation and the Drainage Department had embarked upon the cleanliness and covering works.

“We have constructed a walkway on the area spanning over 1,800 metres in length. The drain extends from Kumar Sabha School to the Dhobi Ghat area,” said Ramandeep Singh.

He said the work had been completed with an expenditure of Rs6.54 crore.

“We have installed MP3 1800 mm diameter pipes at the site, which have been covered with interlocking tiles,” he informed.

He further said the wok on strengthening of the bed of Jacob Drain had also been completed.

“We have modernised the bridges over Jacob Drain and a fence has been erected on the sides to keep the drain clean. The work on the 4-km stretch has been completed in eight months at a cost of Rs5 crore,” said Ramandeep Singh.