As artistes go out of work, Gurinder Makna stands out with online short flicks 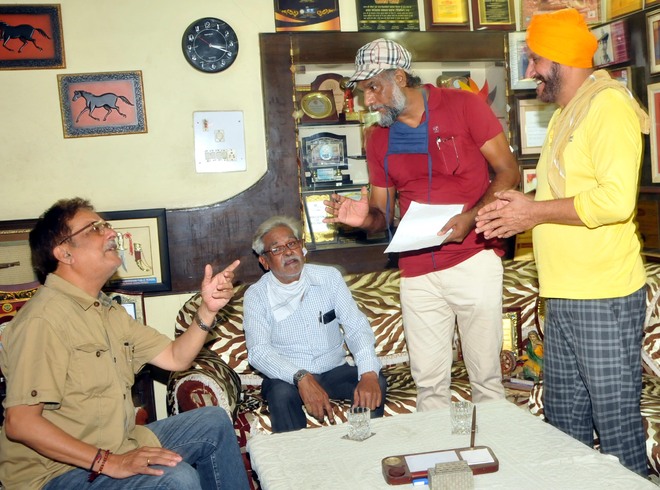 The show must go on: Theatre and film artiste Gurinder Makna (2nd from right) discusses a scene of a short film with actor Vijay Sharma (left) in Amritsar on Tuesday. Tribune photo: Vishal Kumar

At a time when the Punjabi entertainment industry is awaiting the green light to get back into action, the local theatre artistes, who earlier got to work in Punjabi movies, are idling away days. But well-known theatre and film artiste Gurinder Makna has his hands full. He has come up with an idea to produce online short films.

Makna, a versatile actor, has been a part of 30 Hindi movies, two Hollywood flicks and many Punjabi movies. He has recently casted actors for ‘Departure’, an online short movie directed by Emmanuel Singh, based on the hardships of a migrant worker during the pandemic-triggered times. In another project, he has directed a short movie ‘Fathers’ day’.

Before this, he had started online live streaming of plays to keep in touch with the audience. “With more projects in the pipeline we will be able to provide work to more and more local artistes. The featuring of short movies presently is not monetarily very rewarding, but still, it will help artistes a little bit,” he said.

Even as the state government had earlier on requests from the industry allowed shootings, Makna said that directors and producers are wary of the threat. “Making of a film is not a nine to five work. The shootings go on day and night. So, despite relaxation, most big producers and directors are not ready to take the risk. He said some song videos were being shot, but not many artistes get to work in these.

His take on industry’s current condition evokes a response of pointers for the newbies. “I always tell new artistes to have a side-business apart from acting. Barring a few lucky people in the industry, others cannot expect it to be a full-fledged career. But as the industry is still in its infancy, who knows what rewards would be there when it grows up.” He goes on: “With theatres and small projects off the charts these days, the artistes are facing a huge crisis for which seniors should come to rescue.”