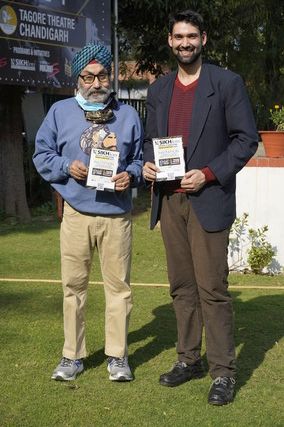 A day dedicated to Sikhism-centric art, films, performances and cultural exchange, the second edition of Sikhlens - Sikh Art & Film Festival 2021- India Chapter is all set to roll on February 21. This annual film festival will include documentaries, short films, 300 plus interesting art display, a book launch, poetry session and talks.

While the California edition of the festival went virtual for year 2020, Bicky Singh, founder of SikhLens, is pleased to have a regular brick and mortar festival at Tagore Theatre, Chandigarh. “The vision of the festival is to promote and bring out positive Sikh stories, heritage and culture and encourage our community to get into films,” he says. Filmmaker and festival head for India Chapter Ojaswwee Sharma says, “Despite the pandemic that stopped the world in its tracks, our festival is presenting 24 films, which is seven films up from the last edition.”

A day of premieres

The festival sees world premiere of three films. The first is Art Finds Its Way, which captures the journey of micro-painter Aman Singh Gulati. Many of his notable almond pieces portray the essence of Sikhism. The second is Kites: Beyond Boundaries, which is about a retired forensic expert and an international kite maker Devinderpal Singh. The third is Silver Lining: The Journey of Rashpal Singh, an inspiring story of seva behind the free-of-cost eye camps for the people in need across rural Punjab. All these three films are directed by Ojaswwee Sharma.

Traasdi Rooh is a documentary by Singapore-based Amardeep Singh on the remnants of Sikh legacy in Pakistan. Tiger Style is the story of music producers Raj and his brother Pops, based in Glasgow, who are promoting Sikh values through their music. Warrior Kaur is about martial arts champion Harleen Kaur in northern England, as she strengthens her connection with her Sikh faith that nurtures her athletic feats and vice versa.

The festival also has a children’s section. For the last six-and- half-years the Sikhlens Digital Voice Program and the Sri Hemkunt Foundation have trained Sikh children in the gurdwaras of California and around the world. These workshops have trained over 1,000 children, from the ages of six to 18, and have made over 125 shorts films. Four of these films will be screened at the festival.

While the films are Sikh-centric, the theme varies – The Cheez That Binds is about Italian-speaking Punjabi farmers integrating into Italian society while teaching them about Sikhism; All Quiet on the Home Front is the story of Bhagat Singh Thind, a Sikh-American soldier, who fought for his ideals. The festival is being organised by Pinaka Media Works and Rolling Frames Entertainment and supported by Chandigarh Administration and Department of Culture Affairs UT.