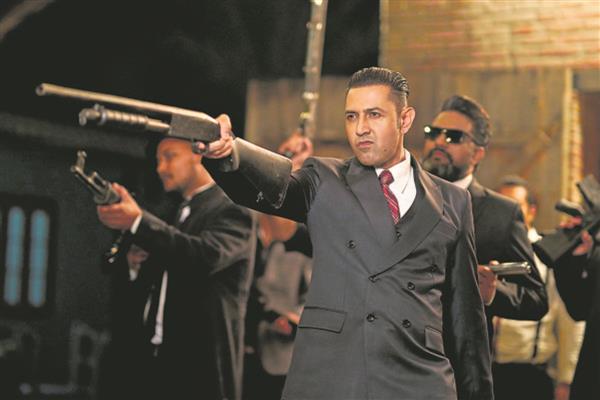 A still from the song Ask Them

Sheetal
When experience meets freshness, magic is bound to happen. Gippy Grewal’s music, served with tadka by young singers, and it sums up the album called The Main Man. The album released on Tuesday evening on YouTube under GeetMP3 label has 13 songs born out of collaborations with singers like Gulrez Akhtar, Bohemia, Karan Aujla, Amrit Maan and Jass Manak. The album stands for the unity in the music industry, which is a rarity in this competitive industry.

On a Facebook and Instagram live video with Karan Aujla, Gippy says the young singers in Punjab have a fan following who would go to the extent to compete in number of comments, whereas majority of his fans belong to an age group which can just click the like button. Ask Them, sung by Gippy ft. Karan, was to release on September 22 but uploaded on September 20, owing to five lakh comments on the premiere video, a limit set by Karan for its pre-release.

All praise for Karan for his respectful behaviour towards seniors in the industry, Gippy says, “People often ask me how is Karan in person. I believe his work speaks for itself, which is a good thing.”

Karan refrains from giving interviews to avoid controversy yet somehow his name has become synonymous with controversy. He speaks his mind in the live video, “We talk and live like any normal human being but different subtexts are given to what we say. Many perceive us to be rude, but they do not understand that we too have a personal life and could be grappling with some issues in our day-to-day life. After all which job is easy? Just because our life is public, we don’t have to reveal each struggle we face. I may have become a known face after my first big hit but often people fail to understand that was not an overnight success. I have been around for a long time but no one knew me before. I have become famous, but that does not mean I have changed. Apaan mehnati bande haan, fukre ni haige! (We are hard-working people, not show-offs). Climbing those ladders of success was a struggle but now the real struggle is to stay in that position.”

Karan has respect and love for his fans but he believes in giving a reality check to those who ask him for personalised birthday wishes or display any attention-seeking behaviour in the comment section.

On this, Gippy shares a few words of wisdom, “It is good that you support and love a particular singer. One can show that support the way he wants to—like, comment and share, but why discredit other singers to show that love? We all come on social media to showcase our products. You take it if you like it. If you ask me, I can never pick between Kuldeep Manak and Amar Singh Chamkila. I love them both.”

About the song, he says, “It was supposed to be a single at first. I met Karan and when we talked about doing a collaboration, the intention was still just one song. But later, the whole scene changed. I was quite impressed when he wrote Ask Them in just two hours.”

Karan, who says he used to dance to Gippy’s song Phulkari during his school days, is currently working on an album besides another song with Gippy.