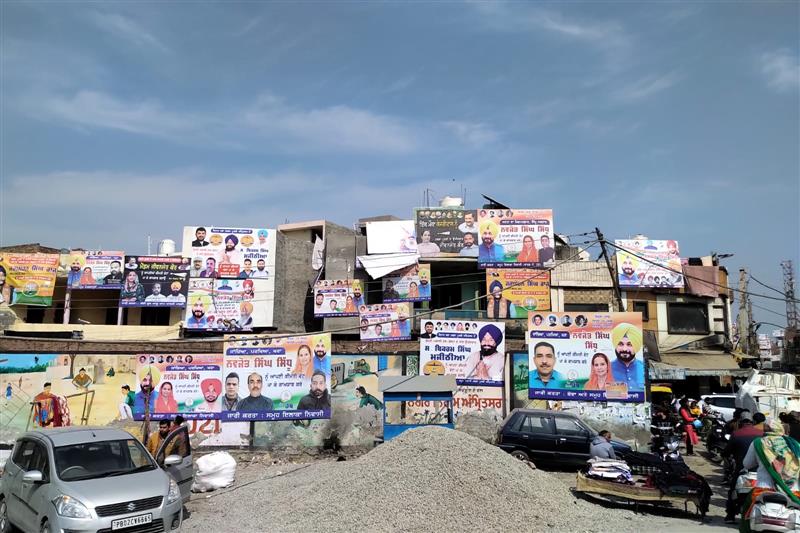 Political flags adorn housetops, cut-outs of candidates dot road-sides and dangle dangerously on electricity poles, as the titans try their luck in the elections. Tribune photo

In cricketer-turned-politician Navjot Singh Sidhu’s den, his party’s CM face Charanjit Singh Channi echoes among voters, who are divided in criticism for Sidhu’s inaccessibility, rude and overbearing behaviour but praise for his clean honest image. The ‘double engine’ of the Congress may have the last laugh even as battle hardened after Amritsari’s SAD candidate Bikram Singh Majithia’s courageous move to take on Sidhu in his own den.

Paramjit Singh sitting on a chair outside the infamous colony of widows -- Maqboolpura says, “I have no love lost for Sidhu or any Congress leader. It is Charanjit Singh Channi I would be voting for. No government has been able to contain drugs and drug deaths in our colony. Channi has done much in few months he got. He is our leader.”

Baljinder Singh, another resident, echoes, “The Congress did well by making Channi the CM face. The double engine Sidhu and Channi of the Congress would pull the government’s train well to progress.”

Sher Singh, who lost his two brothers and a brother-in-law is the only bread-earner of the family now. “My sister’s husband died due to drugs three months ago. No politician visited us. Channi sounds sincere. He can contain drugs. Several residents gave examples of free supply of drugs in the colony continuing unabated.”

Majithia’s challenge to Sidhu in latter’s den has also won several hearts. Gupreet Singh, a resident of Golden Gates Residential Society, said that he had turned a fan of Majithia. “He has the dare to challenge Sidhu. He is a big leader of SAD. He will get many votes, but for Randeep Kaur the election scene is just a tamasha, “Our area is remembered only during elections or on special days concerning drugs abuse. The politician and the media forgets us later. This election tamasha would also be over in two days.” She shifts restless in her charpoy outside her house.

Election fever and fervour hits with full crescendo, unlike other parts of the state lacking colour and usual election din. Political flags adorn housetops, cut-outs of candidates dot road-sides and dangle dangerously on electricity poles, as the titans try their luck in the elections.

The candidates seem to have not spared an inch of space at many places to put up billboards and posters. This is beside the umpteen offices that have sprung up on both sides of the road leading to the constituency.

“Do not go by the number of flags of any party or candidate. You do not know who will emerge the dark horse,” is the first advice of the voters as one enters. “The predominance of one party’s flag may be a good indicator of who is winning but not this time, at least in this constituency, said Parminder Singh, pointing towards his grey beard as sign of his experience, “ It is just money and muscle power.”

BJP candidate Dr Jagmohan Raju is not lagging behind in presence in any way but Jiwanjot Kaur of the Aam Aadmi Party (AAP) can emerge as dark horse, as she enjoys an undercurrent of support in the February 20 elections.

“Sidhu did not get us a job in compensation for the tragic loss of my son Dalbir Singh Ghuggu in the Dasehra train mishap. We got monetary compensation from the state and centre government but no healing balm from our local MLA. He has not visited us for long as well,” says Swaran Kaur in street No 2 near the infamous Jorra Phatak where the mishap took place. Stresses his friend Gursharan Singh standing near a roof top full of Akali flags,” we have seen all parties and their promises. This time we will go for the AAP. They are not loud mouth and are maintaining grace.”

Use of harsh language by Sidhu and Majithia against each other and later apology for the same is already much talked about. But Ranbir Johal, a businessman brushes it aside. “It is high pitch and high prestige political battle. Some fireworks are necessary. And Amritsaris call a spade a spade. Sidhu Dhakkad Banda hai. “

Here is sitting a group of burly Sardars determined to vote for Sidhu, “Yes. There has been an issue of accessibility of Sidhu and use of rough language but we are overlooking it. His wife Navjot Kaur did not lose touch with the area residents. Sidhu is an international name. He is an honest man. How many honest politicians are there these days?” he asks.

“And he did not indulge in political vendetta against Akali workers all these years. We cannot vote for drugs and goonda raj. We are witnessing it since the election scene heated up,” his two friends stress but don’t want to disclose their identity. “We are business persons, you know.”