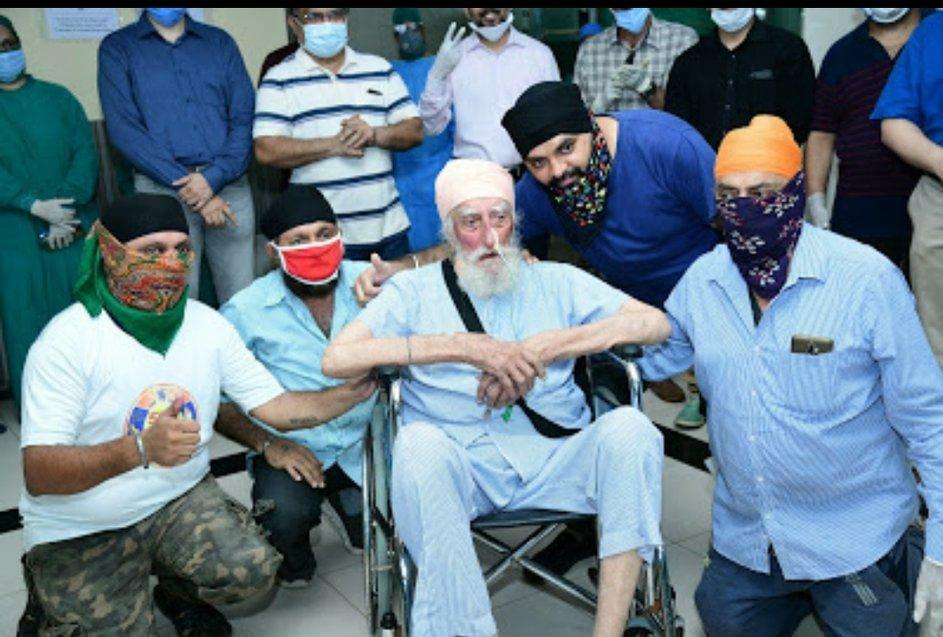 In a huge relief to his anxious family comprising many great-grandchildren, a sprightly 103-year-old Sikh man here vanquished Covid-19 and has returned home to savour the victory, his close relatives said.

Sukha Singh Chhabra was wheeled out of Kaushalya Medical Foundation Trust Hospital here on Monday. He is ranked as India's oldest ICU survivor of Covid-19.

Chhabra's 86-year old younger brother, Tara Singh, who was also infected, spent days in the ICU, and has now been shifted to the ward, awaiting discharge from the hospital in a couple of days.

But for nearly a month, the senior Lahore-born Chhabra's entire family was practically on tenterhooks though Chhabra remained largely unaware of the potentially deadly infection afflicting him.

"On May 31, he tested positive. We downplayed it and requested him to get admitted to a hospital for proper care. He agreed without any fuss, so we didn't see any point in unnecessarily alarming him at his advanced age," his 39-year grandson Gurdeep K Chhabra told IANS.

After his swabs tested positive, he was wheeled into the KMFT Hospital on June 2 as his sons and grandchildren prayed, while his young great-grandchildren waited for the great grandpa to return home to play with them.

Tara Singh had come to visit the family briefly and lived with his elder brother, and hence both got infected and were admitted to the same hospital.

Chhabra's month-long stay in hospital was mostly lonely and without the hustle-bustle of his large family, due to the Covid-19 protocols, but he braved it through remarkably well.

"He had a very tricky course, going uphill and coming downhill. He was twice in and out of the intensive care unit, required non-invasive ventilation, inotropic supports to maintain his heart and lung functions for moderate Acute Respiratory Distress Syndrome, along with Covid pneumonia," said KMFT's Head of Critical Care Medicine Amit Lala Khomane.

A special team of doctors, comprising Khomane, Jayprakash Pednekar and Santosh Dwivedi, was assigned to treat Chhabra on the long road to recovery.

However, they generously acknowledged that "it was the patient's own determination to fight out Covid-19 at this advanced age," which was very important.

"We as doctors left no stone unturned to make him and our other patients win the battle," said another doctor.

After he was accorded a warm send-off with a resounding round of applause, the weary Chhabra returned to the comfort and safety of his home.

"Before lockdown, he was very active as usual. He even visited Gurdwara Shri Dashmesh Darbar, climbed the stairs independently, prayed, took 'prasad' at the langar and returned home," said Gurmukh Singh, also the president of the gurdwara.

Gurdeep Singh Chhabra said his grandfather is quite weak and is on an intravenous semi-liquid diet for the next few days at his bungalow in Khopat locality of Thane.

"We are confident that he will soon bounce back to his active self after he starts savouring his favourite Punjabi vegetarian dishes that he has missed for weeks now," he laughed.