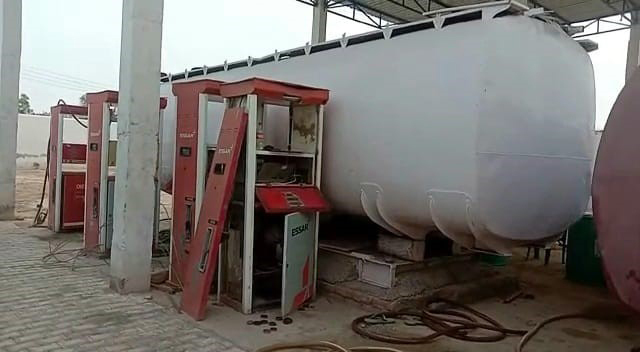 Officials of the Food Supply Department, Weights and Measures Department and the Punjab Police jointly raided a godown-cum-factory that was reportedly doing business under the banner of Kumar Enterprises at the Industrial Focal Point, near Alamgarh Chowk here, and seized about 13,000 litres of inflammable material.

The officials said godown owner Harish Dhingra of Nanak Nagari was not present on the spot, while his servant Raju, a resident of Jammu Basti, was taken into custody by the police.

According to the information received, when the officers of the three departments asked Raju to produce the licence and other documents required to sell inflammable material, he expressed his inability. The officials said there were two tanks, which were used at the petrol/diesel station, two nozzle machines used for pouring oil and 13,000 litres of suspected petrol/diesel in different containers. Fire extinguishing safety arrangements were not made on the premises.

Preliminary investigations reportedly indicated the factory owner was allegedly making profit illegally by manufacturing spurious diesel or petrol, and selling it at exorbitant prices to gullible people. In the criminal report filed after the raid, it was stated five machines with seals of Essar and Hindustan Petroleum were found, along with the recovered nozzles. One of the machines was not in a working condition.

On the basis of the complaint, the police have registered a case under Sections 420, 336 and 265 of the IPC, naming Harish Dhingra and Raju. Further investigation will be done by Station House Officer Baljit Singh. Dhingra allegedly holds a leading position among the fair price shops licensees.