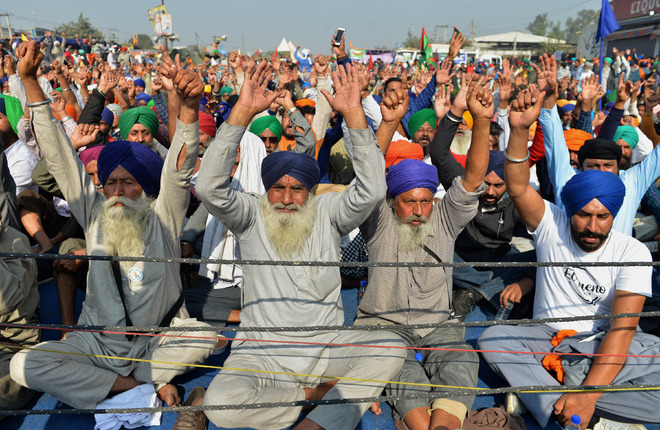 Farmers protest the Central laws at the Singhu border in Delhi on Wednesday. Mukesh Aggarwal

The farmers’ struggle is not a picnic with lavish langars or macho songs, it is a battle being waged at a high cost. In the past two weeks, on an average, one dead body is coming back every day to Punjab from the Singhu and Tikri borders of Delhi, but the government is lingering on the issue.

Four of these farmers have died due to accidents, 10 due to heart attack and one due to cold. The casualties started with the onset of the preparation for the Delhi march of November 26 and 27. The first such casualty took place on November 24 when a large group of farmers was covering tractor-trailers with waterproof sheets in Mehalkalan town of Barnala district. Kahan Singh, an activist of the BKU (Dakaunda) from Dhaner village, was hit by a car and he died on the spot. “Kahan Singh was the first martyr of the Delhi morcha,” says Manjit Dhaner, BKU leader.

He was followed by Dhanna Singh, who died in an accident near Hisar when after breaking barricades, they were speeding the tractor towards Delhi.

Since then, on an average, one name is being added to the list every day, which is getting longer by the day. As per the list compiled from various sources, at least 15 farmers have lost their lives ever since the Delhi stir began.

A large number of protesters have suffered serious injuries while marching to Delhi. BKU (Ugrahan) general secretary Sukhdev Singh Kokri fractured his arm. Similarly, a photo of Mahinder Kaur, a protester from Alorakh village in Sangrur district, had gone viral when her leg was fractured in an accident but she refused to return without winning the battle in Delhi.

“This shows how insensitive the Union Government is towards the demands of farmers. The Prime Minister did not utter a word about the harsh cold

Though farmers have suffered severe losses, they are determined to take the struggle to its logical conclusion. “Earlier, we lost 10 of our comrades. We may lose more, but won’t return till the government bends,” says Rajinder Singh of the Kirti Kisan Union. Till November 20, 15 farmers had died while protesting at various sites in Punjab.

Protesters who passed away during agitation