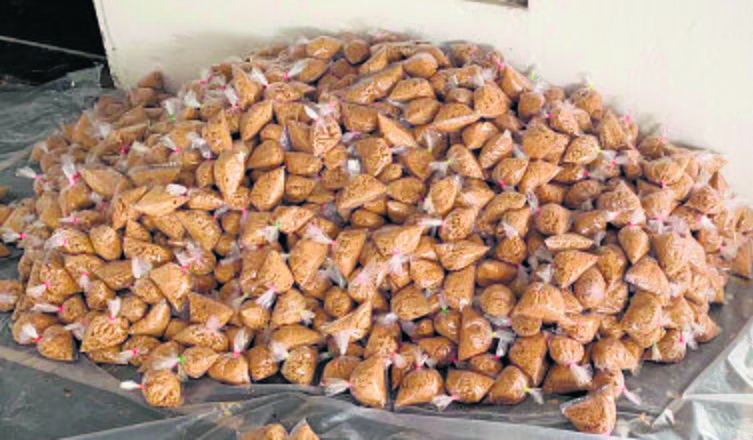 Packets of panjiri lying at Sekhan village of Barnala on Sunday.

After pinnis, fruits, vegetables and others items, now 15 quintal panjiri has been prepared in Sekhan village gurdwara for the farmers protesting at the New Delhi border against the farm laws. A team of locals, with thousands of packets of panjiri and bottles of water, will depart from the village on Monday morning.

The group was busy packing panjiri, while some NRIs have sent Rs 2 lakh to the Chhote Sahibzade Welfare Society at Sekhan and Surjitpura villages to help the farmers. Each small packet contains 250 gm panjiri.

A huge heap of packets is being made ready as the locals have set the target to end their job before Sunday night, so that the youth can leave for New Delhi in the wee hours of Monday.

“Panjiri is an inseparable part of our diet in rural side, and its consumption increases during winter. Our brothers, elders, mothers and sisters, who are fighting for us in this biting cold at New Delhi, need it more than us,” said Bikram Singh, a member of the society.

Some other persons said they would take panjiri packets and water bottles in a truck to the border. They said they were in touch with various farm unions and they would serve the farmers as per their requirements. They had taken a detailed feedback about the area, where they should serve panjiri, as protests were taking place at different areas,” the locals said.