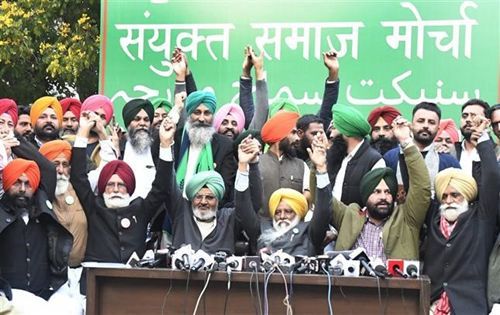 As many as 16 farmer unions, which had joined hands with the Samyukt Samaj Morcha (SSM), have quit the political outfit. A decision to go apolitical was taken at a meeting held under the leadership of Manjit Singh Rai today.

The separation comes days after the SSM had formed a committee to work towards getting a share for themselves in the political arena.

The unions also formed a five-member committee, comprising Jagmohan Singh Patiala, Satnam Singh Baheru, Baldev Singh Nihalgarh and Raminder Singh Patiala, besides Rai, to look at ways to again unite all farmer unions to fight for the farmers’ cause.

They also decided to participate in a campaign started by the Sanyukt Kisan Morcha (SKM) from April 11-17 to raise awareness on their cause and demands. Meanwhile, the SSM in a press note said its future should be decided at a meeting of 22 unions that had come together to form the outfit. “Its fate should be discussed at the meeting of the 22 unions,” reiterated Prem Singh Bhangu of the SSM. — TNS