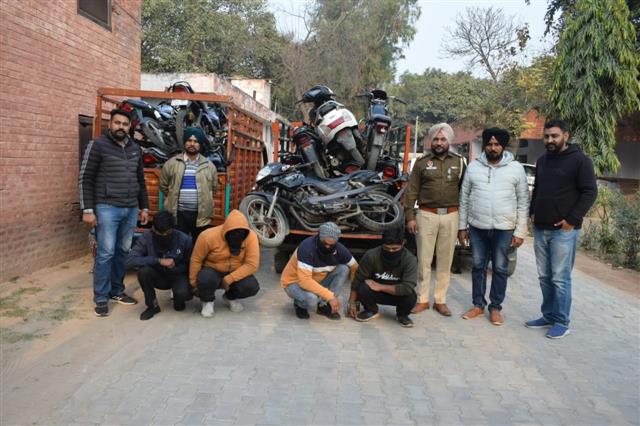 Culprits in police custody in Faridkot on Wednesday.

We are hopeful of detecting more vehicle thefts after the questioning of these accused, said Raj Pal Sandhu, SSP, Faridkot. He said the police have recovered 14 motorcycles, three cars and a stolen truck which the accused were using to transport the stolen vehicles.

The police have also recovered a cutter from the accused which was used to dismantle the stolen vehicles before selling the same to scrap dealers.

The SSP said the accused have confessed to the theft of 12 more vehicles from Kotkapura, Faridkot, Nakodar, Ludhiana, Dharamkot and Makhu area. The police are in process of making recovery of these stolen vehicles, he said.

The police have also claimed of solving a snatching case. In this case, two motor cycle riders had snatched a bag of an NRI woman of Fatehgarh Sahib when she was in Faridkot last week.

Arresting three youths, the police claimed of recovering 1,000 Austrian Dollar, a hand bag and an iPhone.