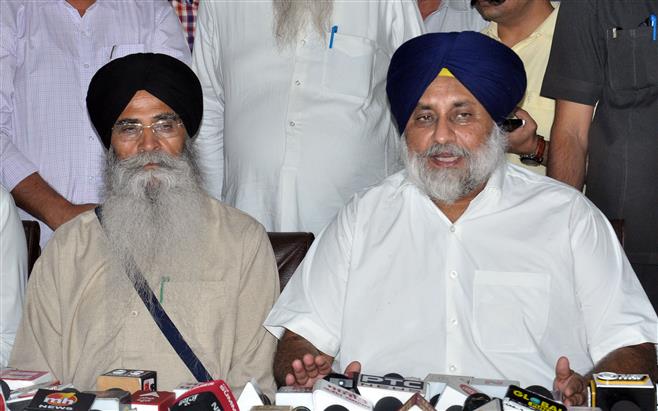 In a big setback to the SAD president, two more members of the SGPC from Barnala have raised a banner of revolt and announced support for Bibi Jagir Kaur in the SGPC elections.

They have also appealed to all members to free the SGPC from the alleged clutches of SAD president Sukhbir Singh Badal, who has allegedly failed to deliver justice in cases pertaining to sacrilege of Guru Granth Sahib.

“I will vote for Bibi Jagir Kaur and also request the House to support Bibi Jagir Kaur as it is the first time that we have got a chance to free the SGPC from SAD president Sukhbir Singh Badal, who wants to run the panel and the party as per his wishes without caring for the workers and leaders,” said Baldev Singh Chungha, an SGPC member from the Bhadaur area in Barnala district.

Chungha was expelled from the SAD in March 2022 after he supported calls for a change in the leadership of the SAD.

“Neither am I against the SAD nor against the present president of the SGPC, Harjinder Singh Dhami, who is a good man. I know him personally. However, since Dhami is not able to take decisions independently, there is a need for changing the SGPC president,” said Chungha.

Former SAD MLA and current SGPC member Balbir Singh Ghunas said despite working hard for the party and the Sikh Panth, he was being sidelined for no reason.

“I respect Bibi Jagir Kaur as she is the first one to have taken a stand for transparency in the working of the SGPC. I will vote for her and hope that she will apologise after becoming the SGPC president for the sacrilege of Guru Granth Sahib,” he said.

Senior SAD leader from Barnala Satnam Singh Rahi said Chungha was expelled from the party while Ghunas enjoyed power when the SAD was in power.

“The SAD president has always taken care of all workers and all effective steps to punish persons involved in sacrilege of Guru Granth Sahib. All allegations are baseless,” he said.