200 pigs found dead in Patiala, cause unknown : The Tribune India 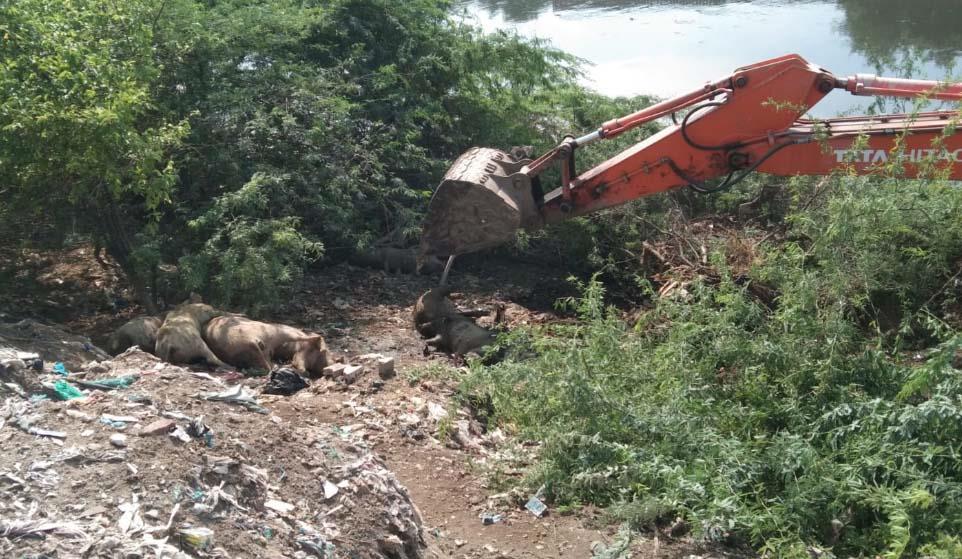 The carcasses of pigs being disposed of near Badi Nadi in Patiala.

While the civic authorities are already busy checking the spread of lumpy skin disease among domesticated and stray animals, death of nearly 200 pigs adjoining the Chhoti Nadi within the Patiala Municipal Corporation limits has sent the officials into a tizzy.

The MC, with the help of officials of the Animal Husbandry Department, has sent the samples of the pigs for testing to a lab in Jalandhar. The civic body has also tested its employees for swine flu, while the cause of the death of the pigs is unknown.

MC officials said: “The civic body started receiving information about the death of a number of pigs near the Chhoti Nadi two days ago. The MC contacted the officials of the Animal Husbandry Department, who collected swab samples, samples of blood and skin and sent them to the lab for testing.”

Patiala Senior Veterinary Officer Suninder Kaur said the department started collecting the samples on Monday. “The samples have been sent to the Regional Disease Diagnostics Laboratory (RDDL), Jalandhar. The report is awaited,” she said.

The corporation has not carried out a complete census of the pigs but has disposed of them in pits adjacent to the dumping ground near the Badi Nadi after collecting samples.

MC Commissioner Aaditya Uppal said: “Earlier, we suspected it to be a disease and got our employees tested for swine flu. Only the pigs that roamed around the Chhoti Nadi have died and pesticides or another poisonous substance in the adjoining area could be the reason behind the incident. We are waiting for the diagnostic report.”

He said the MC had distributed masks and other protective gear among staff working adjoining the site.

The samples have been sent to the Regional Disease Diagnostics Laboratory in Jalandhar. The report is awaited. — Suninder Kaur, Patiala senior veterinary officer