The doors were installed by Sikh ruler Maharaja Ranjit Singh 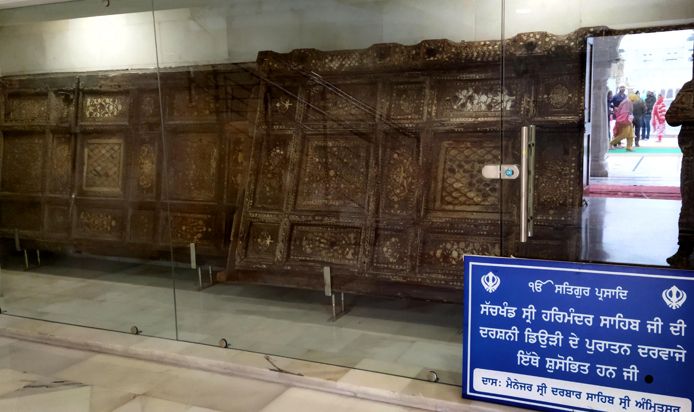 The Darshani Deori doors on display in the Central Sikh Museum at the Golden Temple on Monday. Tribune photo: Sunil Kumar

A historic pair of doors installed by Sikh ruler Maharaja Ranjit Singh around 200 years ago on “Darshani Deori”, the archway leading to the Golden Temple’s sanctum sanctorum, has been put on display for devotees. These original doors, 118 inch in height, 110 inch wide and with a thickness of 4 inch, have a sandalwood base with a silver sheet studded with carved ivory and assembled with golden screws.

A special glass display case has been installed at the entrance of Central Sikh Museum, located adjacent to ‘parikrama’. The original doors carved by Yaar Mohammed Khan were installed by Maharaja Ranjit Singh in 1800 AD.

In the backdrop, these doors decayed with time and were unhooked for repairs in 2010, but the restoration work could not be executed due to several hiccups. The wooden base was found beyond repair and non-availability of ivory that was to be engraved on the doors’ borders proved a major task. As the sale of ivory is banned in the country, the SGPC had decided to leave the original doors “untouched”. Hence, the original doors were replaced with its replica in October 2018.

SGPC chief Harjinder Singh Dhami said the original doors have been showcased in a special glass enclosure for the pilgrims. “The purpose is to preserve them as a part of the Sikh history and apprise the visitors about it. We had to remove them from ‘Darshani Deori’ as they decayed with time and a replica was the only way out. Every minute detail was clicked through micro-digital photography technique to observe its pattern to prepare its copy. Craftsmen from Agra were engaged for carving work,” he said.

Barring the ivory work (which was replaced with seashells to have desired effect), the new doors were an error-free copy and were installed at the designated place on “Darshani Deori”.

The craftsmen took eight months to prepare the replica. At least six quintals of black sheesham and 65 kg of silver was used for the job that was completed under the supervision of Kar Sewa Baba Kashmir Singh Bhurewale.