Took a roadways bus, ate at a dhaba; the youth was not under home quarantine despite travel history to Nepal 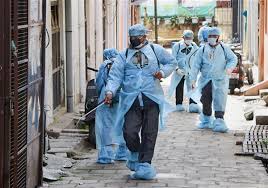 The 21-year-old youth from a village in Patiala — who tested positive for the COVID-19 — had come in contact with hundreds of people before he was admitted to the isolation ward of Civil Hospital, Ambala.

The carrier of coronavirus, in fact, returned from Nepal to New Delhi in an Indigo flight; thereafter he took a Haryana Roadways bus from New Delhi and reached Ambala, on March 19.

On his way to Ambala, he had a meal at a dhaba at Pipli bus stand. After reaching Ambala, he, along with his friend, went to his aunt’s place in Shahpur – a village on the Punjab and Haryana border.

At his aunt’s place, he is said to have come in contact with his uncle, a cousin, and two kids. He shared the room with his cousin during night. The village has already been sealed by the administration.

The next day, on March 20, he went to his home in Ramnagar — a village in Ghanaur block of Patiala.

In a major lapse, the 21-year-old, was not put under home-quarantine by the administration. Reason: his name was not in the list of foreign returnees.

He is said to have not used his passport as an identification proof for his journey to Nepal; consequently, he didn’t come under the scanner of the administration or health department.

He had been living in his joint family — at his native village — since his return. Therefore, the immediate cause of concern for the health department is to identify the number of people who have already come into his contact. It has been learned that he was roaming freely in the village since his arrival.

Astoundingly, he himself got admitted to Ambala Civil Hospital after he got high fever on March 26. It has been learnt that he visited a quack before the hospitalization.

Meanwhile, the health department claimed that he might have been directed by the officials at the airport to self-isolate. However, he didn’t stick to his house and possibly affected dozens of villagers. The health department said that as many as 14 people of his extended family had been already admitted to Government Rajindra Hospital, Patiala.

The Deputy Commissioner last week had requested the village sarpanches and other residents to inform about all the people with a foreign travel history.