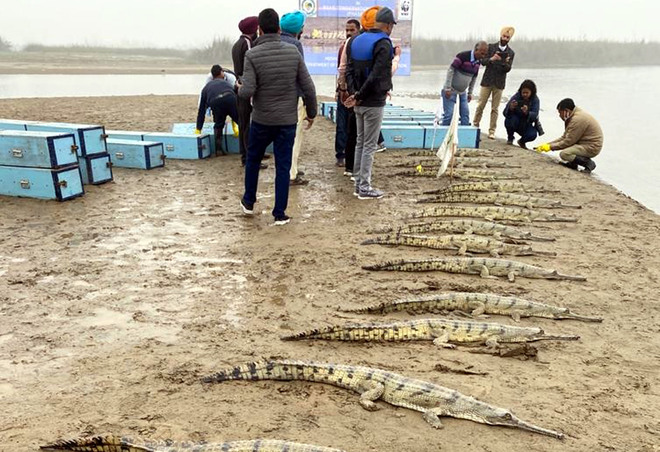 The reptiles have been brought from Madhya Pradesh. Tribune photo

The Department of Punjab Forest and Wildlife Preservation, in collaboration with the World-Wide Fund for Nature-India (WWF-India) recently released another lot of 23 gharials into the Beas flowing in Hoshiarpur district.

It was an extension of the state’s programme, conceptualised in 2005, to reintroduce, preserve and breed these critically endangered species of crocodile in Punjab streams.

In the phase-I of this project, 47 juvenile gharials were released into the Beas Conservation Reserve in batches between 2017-2018 in Amritsar and Tarn Taran.

He said the long snouted gharials (Gavialis gangeticus) were brought here from Morena, Madhya Pradesh, under the phase-II of the project.

Gursharan Singh, DFO, Wildlife, Hoshiarpur, said the species were three-year-old. “We had plans to release them in March 2020, but the move was postponed due to the pandemic. So, these were kept at the Chhatbir zoo before their final destination in the Beas.”

Meanwhile, a joint monitoring team of the Wildlife Division, Hoshiarpur, and the WWF-India, has been formed for daily monitoring of gharials for one month. Field surveys conducted, so far, indicated that gharials had dispersed both upstream and downstream of the release sites in the Beas Conservation Reserve.

Gitanjali Kanwar, coordinator, WWF-India, said post release, monitoring was one of the vital aspects of the gharial reintroduction. “The surveys will focus on understanding dispersal, habitat preference, population ecology and general well-being of the released gharials. These gharials, the shy reptiles, belong to fish-eating species and do not attack human beings or animals,” she said.

The Beas Conservation Reserve — a 185-km stretch of the Beas — was found to be a perfect habitat for the gharials, which were reintroduced into the river two years ago.